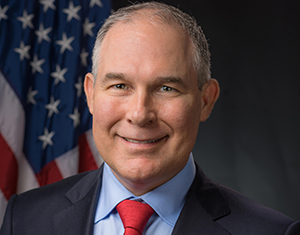 Environmental Protection Agency administrator Scott Pruitt announced Monday that he will repeal the Obama administration’s Clean Power Plan through a proposed rule that will be published in the Federal Register.

Pruitt told coal miners that “the war on coal is over” and he will begin efforts to withdraw the Clean Power Plan, report the New York Times and the Washington Post. Pruitt’s announcement follows an executive order by President Donald Trump directing the EPA to rescind and rewrite the plan.

Pruitt took action on Tuesday by issuing a notice of proposed rulemaking, WKYT reports. A press release is here.

The attorneys general of New York and Massachusetts said they will challenge the repeal after it is finalized.

The EPA argues the Obama administration exceeded its legal authority by seeking to force utilities to reduce carbon emissions through actions outside their fossil-fuel energy plants, such as by replacing the plants with solar or wind power, the New York Times reports in a separate article. Such “outside the fence line” requirements fall outside traditional limits on EPA authority, according to the EPA press release.

More than two dozen states had challenged the Clean Power Plan, and it has never taken effect. In February 2016, the U.S. Supreme Court issued a stay while the U.S. Court of Appeals for the D.C. Circuit considered that case and four others.