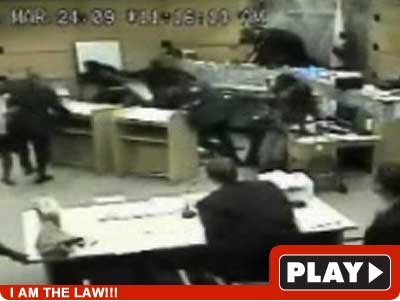 Click on the TMZ image to view the video.

When a melee broke out in his Fort Lauderdale, Fla., courtroom yesterday morning, one of Broward County’s newest judges didn’t make a safety play and retreat to chambers.

As a suspect suddenly attacked a witness who had been testifying in a restraining order matter, Judge Ian Richards vaulted over the bench and rushed to her aid, reports the Miami Herald in an article today and an earlier breaking news post.

The 33-year-old jurist and an unidentified lawyer representing witness Nicole Word both tried to shield her from her ex-boyfriend, John Charles Reasee, 29. But he still allegedly managed to hit her with a closed fist before the judge, the lawyer, the courtroom bailiff and four Lauderhill officers—who had been waiting to testify in another case and ran in to help after an unidentified person ran screaming out of Richards’ courtroom—subdued Reasee.

”I thought he was going to kill me,” Word tells the Herald. “I really did.”

A video of the courtroom chaos reportedly captured by a courtroom camera is posted on TMZ (over the headline “I AM THE LAW!!!”), and earned Richards a “Judge of the Day” accolade from Above the Law.

Writes the South Florida Sun-Sentinel in an article about the case: “Justice can be swift in Broward County.”

Reasee, who reportedly went for Word after the judge told him he was headed to jail for violating a restraining order, is now facing new charges of domestic battery and resisting arrest over the incident.

Daily Business Review (via New York Lawyer, reg. req.): “Is That a Robe or a Cape?: Judge Leaps Over Bench to Tackle Man Attacking a Woman in His Court”