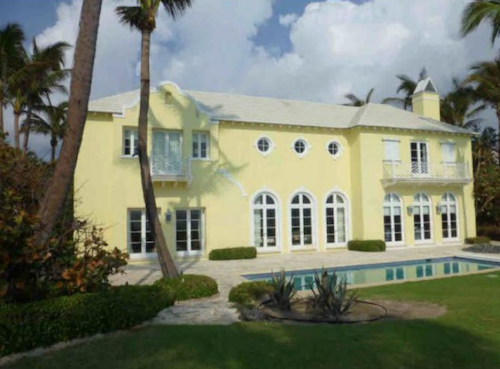 For the last 18 years, Florida resident Donald Burns has been living in his 10,000-square-foot mansion—which he describes as a “traditional home”—on the Atlantic Ocean in Palm Beach, Florida. Photo from the 11th U.S. Circuit Court of Appeals at Atlanta’s June 8 decision.

A federal appeals court has rejected constitutional claims by a Florida resident who sued when a town rejected his plans for a new beachfront mansion that would be dissimilar to nearby homes.

The 11th U.S. Circuit Court of Appeals at Atlanta ruled against Donald Burns of Palm Beach, Florida, in a 2-1 decision Tuesday.

Past news coverage from the Palm Beach Post described Burns as a “telecommunications mogul.” He sold his existing mansion for $28 million last year while the appeal was pending, according to the Real Deal.

Burns had sought to tear down his traditional beachfront mansion and to replace it with a mansion nearly twice the size in midcentury modern style. Burns said the new mansion would reflect his evolved philosophy of simplicity in lifestyle and living with an emphasis on fewer possessions.

The town of Palm Beach’s architectural review commission had rejected Burns’ plans under a mandate to achieve “comprehensive cohesiveness” in development. Applying its criteria, the commission said the proposed mansion was not in harmony with proposed developments in the general area and was too dissimilar to nearby homes.

“In my view,” Marcus wrote in dissent, “the First Amendment—the most powerful commitment to think, speak and express in the history of the world—does not permit the government to impose its majoritarian aesthetic whims on Burns without a substantial reason.”

The majority concluded that there was no First Amendment violation “because there was no great likelihood that some sort of message would be understood by those who viewed Burns’ new beachfront mansion.”

The majority also found no violation of Burns’ 14th Amendment rights because the commission’s criteria were not unconstitutionally vague and were not applied differently to Burns.

The majority criticized Marcus’ dissent for discussing architectural styles and articles that weren’t part of the case record.

The majority said it was concluding that Burns’ new mansion was not expressive conduct protected by the First Amendment while saving for another day the harder issue of whether residential architecture can ever be expressive conduct.

“The conduct was not like the proverbial tree, which was out of view because it was deep in the forest,” the majority wrote.

In Burns’ case, however, the message that Burns sought to convey through his proposed mansion’s simple lines and minimal decorative elements would be shielded from view by a limestone wall, a louvered gate and heavy landscaping.

“A viewer cannot infer a message from something the viewer cannot view,” the appeals court said. “From Day One, Burns wanted to conceal from his neighbors what he now says is his message.”

Even if viewers could see Burns’ new mansion through the landscaping, there is still no great likelihood that they would understand that the home conveyed some sort of message, the appellate majority said.

“A reasonable observer would view Burns’ new mansion as a really big house but not as an expression of some sort of message,” the court said.

Florida Politics had coverage of the opinion.