Can this Foley & Lardner lawyer keep the Buffalo Bills from relocating? 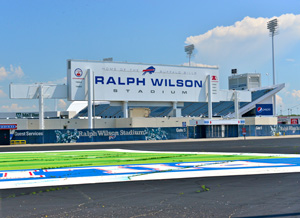 New York Governor Andrew Cuomo has hired Foley & Lardner to try and keep the Buffalo Bills from leaving the state.

The Buffalo News reported on Wednesday that Cuomo has turned to Foley partner Irwin Raij of Manhattan. The paper states that the firm’s contract will run for three years and will pay Foley up to $350,000, plus expenses. Raij’s rates will be capped at $495 per hour under the terms of the noncompetitive contract.

The team’s future has been in a state of flux since longtime owner Ralph Wilson died in March. The team is expected to be sold, and as ESPN points out, there are plenty of more lucrative markets for the team to explore, including Los Angeles or even international cities like London and Toronto.

“I think it’s unknown because we don’t know who the owner is going to be, so you always want to know what the other party will want,” Raij said in an interview with the Buffalo News. “But from the state perspective, our interests have not changed. We want to keep the Bills in New York, so we know what our goal is, and I think everybody knows what our goal is, and we’re not bashful about it. How we get there – it’s so early in the process.”

Raij has a history with the Bills. Most recently, the 43-year-old negotiated the team’s 10-year lease with Ralph Wilson Stadium in 2013. He told the Buffalo News that he considered that lease Phase 1 of the long-term plan to keep the Bills in New York. “Now we have to work on Phase 2, which is how to take [the Bills deal] from 10 years to, whatever, 25 or 30 years,” he said to the Buffalo News. “Frankly, I don’t know what that solution is yet.”

Raij also has history with Governor Cuomo. Before joining Foley & Lardner, he was a senior attorney at the U.S. Department of Housing and Urban Development under Cuomo, who was the agency’s secretary during the Clinton administration. Raij has a lengthy sports resume, as well. According to his firm, he was lead partner for Guggenheim Baseball Management when it bought the Los Angeles Dodgers for a record $2.15 billion in 2012. Last month, the Am Law Daily reported that he was part of a team of Foley lawyers that helped keep the Milwaukee Bucks from relocating when it was sold for $550 million. He’s worked on stadium deals for the Oakland A’s and Miami Marlins, and worked on the relocation of the Montreal Expos to Washington, D.C. in 2004.