ABA urges Kavanaugh vote be delayed until after an FBI investigation

Updated: In an emotional day of testimony on Thursday, U.S. Supreme Court nominee Brett Kavanaugh and a woman who accused him of sexual assault talked about the lasting impact of the allegations and events before a national TV audience.

Late Thursday night, the ABA delivered a letter to the committee urging them to delay the vote until “after an appropriate background check into the allegations made by professor Ford and others is completed by the Federal Bureau of Investigation.”

The letter, signed by ABA President Bob Carlson and addressed to Senate Judiciary Committee Chairman Charles Grassley, R-Iowa, and Sen. Dianne Feinstein, D-Calif., goes on: “We make this request because of the ABA’s respect for the rule of law and due process under law. The basic principles that underscore the Senate’s constitutional duty of advice and consent on federal judicial nominees require nothing less than a careful examination of the accusations and facts by the FBI.

“Each appointment to our nation’s highest court (as with all others) is simply too important to rush to a vote. Deciding to proceed without conducting additional investigation would not only have a lasting impact on the Senate’s reputation, but it will also negatively affect the great trust necessary for the American people to have in the Supreme Court. It must remain an institution that will reliably follow the law and not politics.”

On Friday afternoon, the Senate Judiciary Committee voted 11-10 to advance Kavanaugh’s nomination to the Senate. Sen. Jeff Flake, R-Ariz., said before the vote that he had spoken with Democrats, and believes it would be proper to delay a vote of the entire Senate until the FBI does an investigation that takes no more than a week.

Later on Friday, Republicans agreed to delay a vote by the full Senate for a week to allow for an FBI probe.

Kavanaugh had brought up his “well qualified” rating from the ABA Standing Committee on the Federal Judiciary in response to questions by Sen. Mazie Hirono, D-Hawaii.

Angry at first, Kavanaugh then fought back tears as he categorically denied the assault allegation and complained of a “an orchestrated political hit” during testimony before the Senate Judiciary Committee. “My family and my name have been totally and permanently destroyed,” he said.

Kavanaugh’s remarks followed morning testimony by Christine Blasey Ford, who said Kavanaugh had sexually assaulted her at a party she attended during the summer of 1982 when both were high school students. Ford mostly stuck to her prepared remarks, while Kavanaugh’s statement was markedly different than prepared written testimony submitted to the Senate Judiciary Committee.

For weeks, Kavanaugh testified, some Democrats were “lying in wait” with Ford’s allegation, ready to use it “only if you couldn’t take me out on the merits.” 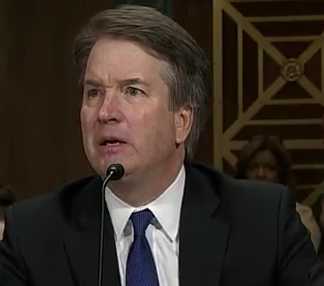 Now there are last-minute accusations being made that include “crazy stuff” such as gangs, illegitimate children, fights and other “nonsense,” reportedly “breathlessly and often uncritically by the media,” he said.

Kavanaugh labeled the confirmation process “a national disgrace” and a “circus” marked by “grotesque and coordinated character assassination.” The Senate’s constitutional role of advice and consent has fallen by the wayside, he said, having been replaced with “search and destroy.”

Despite the impact of the allegations, Kavanaugh said he won’t be intimidated into withdrawing his nomination. “You may defeat me in the final vote, but you’ll never to get me to quit, never.”

Repeating a statement he has made before, Kavanaugh said he has “never sexually assaulted anyone, not in high school, not in college, not ever.”

Kavanaugh said he doesn’t dispute that Ford may have been assaulted by some person at some time and at some place, but he had no involvement and he wasn’t at the party she described. He said he has no ill will toward Ford and her family, and noted, while appearing ready to cry, that his daughter, Liza, wanted to pray for her.

Kavanaugh also talked about the 1982 calendar he had submitted in an effort to show that his schedule did not include a party like the one described by Ford. Kavanaugh said his father kept detailed calendars that he also used as a kind of diary, and Kavanaugh decided to emulate him.

Kavanaugh didn’t list church on Sundays, he said, just as he didn’t list the times he brushed his teeth. For him, church is like brushing his teeth—it’s automatic, Kavanaugh said.

With her voice breaking at times, Ford detailed her allegations. Ford said the party she attended was a small gathering, and Kavanaugh and his friend Mark Judge were there. When she went upstairs to use a bathroom, she was pushed from behind into a bedroom.

Kavanaugh and Judge locked the door behind them, and turned up the music playing in the background. Ford said she was pushed on the bed and Kavanaugh got on top of her. Kavanaugh was running his hands over her body, grinding into her and trying to take off her swimsuit, she said. She tried to yell, but Kavanaugh put his hand over her mouth to stop her from screaming.

The hand over her mouth terrified her the most, she said. “It was hard for me to breathe, and I thought that Brett was accidentally going to kill me.” Both Kavanaugh and Judge were laughing, and they both seemed to be having a good time, Ford said.

Judge jumped on the bed, and the second time they toppled over, so that Kavanaugh was no longer on top of her, she said. She ran into the bathroom and locked the door. After Kavanaugh and Judge went downstairs, Ford ran down the stairs and out the door.

In questioning that followed, Ford told Feinstein that she has suffered post traumatic stress disorder-type symptoms since the assault that included anxiety and claustrophobia. During a remodeling of her home, she insisted on a second front door.

In the initial years after the assault, Ford said, she struggled academically and had a hard time forming relationships, especially with males.

Under questioning by Sen. Patrick Leahy, D-Vt., Ford said that what stands out about the incident is “the uproarious laughter” between Kavanaugh and Judge during the assault.

Ford told Sen. Dick Durbin, D-Ill., that she is “100 percent” sure that her attacker was Kavanaugh.

The Democrats questioned Ford on their own, while Grassley and other Republicans gave their questioning time of Ford to sex crimes prosecutor Rachel Mitchell of Maricopa County, Arizona. Mitchell asked some questions of Kavanaugh, but Republican committee members then took over their own questioning.

Grassley said before Ford’s testimony that Mitchell would lead the questioning to avoid “grandstanding and chaos.” He said his staff had spoken with three people said to be at the party, and all had denied the events, a point Kavanaugh also made in his testimony. Ford’s allegations are not only uncorroborated, they are “refuted,” he said.

After Kavanaugh testified, President Donald Trump tweeted his support for Kavanaugh’s “powerful, honest, and riveting” testimony and called for the Senate to vote, writing, “Judge Kavanaugh showed America exactly why I nominated him.”

Updates at 10:55 a.m. with comment to Durbin; recasts headline and updates throughout at 4:17 p.m. Updated at 5:38 p.m. with Kavanaugh’s comment to Sen. Hirono and to note that Senate Republicans resumed their own questioning for Kavanaugh. Updated at 8:17 p.m. to state that the committee intends to vote Friday morning and to add President Donald Trump’s tweet. Updated Sept. 28 at 6:06 a.m. with information from the ABA letter, and at 6:50 a.m. to adjust the headline; updates second paragraph at 9:15 a.m. Friday with vote scheduled; updates with new fifth paragraph and trims outdated information on procedure at 1:38 p.m. on Sept. 28; updates with new sixth paragraph on Sept. 28.