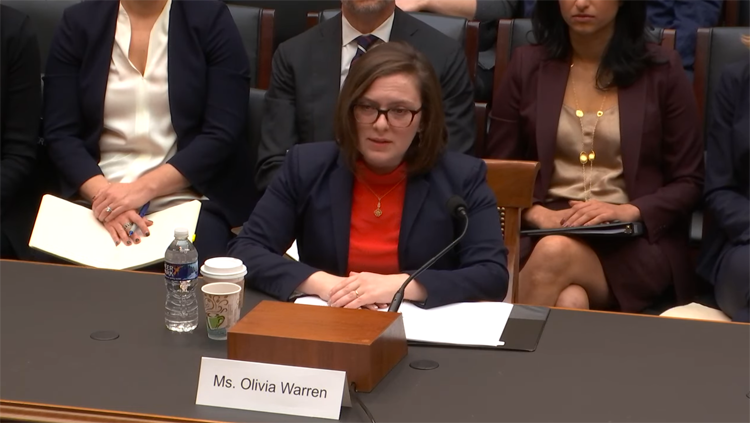 Attorney Olivia Warren delivers testimony about her clerkship with Judge Stephen Reinhardt to the House Judiciary Subcommittee on Courts, Intellectual Property and the Internet.

A former law clerk for the late Judge Stephen Reinhardt alleged Thursday that the liberal federal appeals judge had created a "profane atmosphere" and sexually harassed her on a weekly and even daily basis.

The former clerk, Olivia Warren, said Reinhardt had commented on the appearance of women, made remarks about her sexual relationship with her husband, and said women lied about sexual harassment.

Reinhardt, a judge on the 9th U.S. Circuit Court of Appeals at San Francisco, died at the age of 87 in March 2018. Warren worked for Reinhardt beginning in May 2017 until his death. She is currently a lawyer with the Center for Death Penalty Litigation.

Warren’s testimony begins at 34:22 of this video. Her prepared remarks are here; they differ from her oral remarks. Bloomberg Law and Law.com also have coverage.

Warren said Reinhardt was “complicated” and she opposes the condemnation of any human being. He was brilliant and a courageous champion of causes, she said. But there was also a negative side.

“I saw the bad in him,” she said in her oral remarks. He was “a judge who demeaned his employees, a man who demeaned women, and a man who sexually harassed me.”

Warren said the clerkship began with an incident in which Reinhardt showed her a graph with two curves. He had added two dots to the top of the curves. Reinhardt asked her whether the graph was accurate. His tone and demeanor led Warren to believe he was asking if the diagram looked like her own breasts.

It was the beginning of what felt like an endless stream of comments by the judge in which he denigrated her appearance, Warren said in oral and written testimony.

The #MeToo movement was a frequent topic of conversation. Reinhardt said that women who alleged sexual harassment against men such as Louis CK and Harvey Weinstein were women who initially “wanted it” and then changed their minds. Women were liars, he allegedly said, and could not be trusted.

Reinhardt was particularly troubled by the allegations against his colleague, 9th Circuit Judge Alex Kozinski, who eventually announced his retirement. Fifteen women had accused Kozinski of inappropriate sexual comments and conduct in two Washington Post articles.

On one occasion, Warren told Reinhardt she was disappointed that someone with his intellect couldn’t grasp the pervasive and harmful nature of sexual harassment. Reinhardt allegedly screamed that Warren was not as smart as he thought she was, and she was “just a stupid little girl.”

Warren said she was afraid to report the misconduct for fear it would end her legal career and lead Reinhardt to exact revenge.

After Reinhardt’s death, Warren contacted her alma mater Harvard Law School because she hoped that her experience would lead the school to scrutinize clerkships more carefully. After several weeks she was able to meet with Harvard Law staff, including the dean, but says she has not been contacted further and does not know whether their processes have changed. She also called the Office of Judicial Integrity, created after Kozinski’s retirement to address sexual harassment in the judiciary. Warren was advised to contact a circuit representative and received no meaningful guidance on confidentiality, she says. Warren did not follow through with that suggestion.

Warren said she wants to report the harassment now to minimize the chance that others in her position will face similar harassment. She testified before the House Judiciary Subcommittee on Courts, Intellectual Property and the Internet.

A spokesperson for the Administrative Office of the U.S. Courts told Law.com and Bloomberg Law in a statement that no one should suffer the kind of harassment described by Warren.

“We are deeply concerned about the new information we have learned through Ms. Warren’s statement, and we take her statement very seriously. We are committed to addressing this new information and continuing to refine our processes and procedures for protecting our employees and addressing misconduct,” the statement said.

House Judiciary Committee chairman Jerrold Nadler of New York released a statement after the hearing. “Culture change starts with the recognition that the judiciary is more than just its judges, and that protecting powerful judges from accountability and embarrassment is not the same as protecting the integrity of the judiciary, especially if it leaves law clerks and other employees more vulnerable to misconduct,” he said.