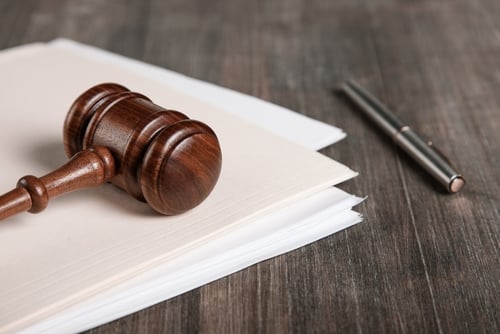 A former U.S. attorney for the Southern District of Georgia has surrendered his law license after his January conviction on two counts of aggravated stalking for harassing a former girlfriend.

The Georgia Supreme Court accepted the petition by Richard Scott Thompson in a May 20 opinion, report the Daily Report Online and the Legal Profession Blog.

Thompson was a U.S. attorney from 2001 to 2004. He resigned before the Department of Justice’s Office of Professional Responsibility concluded that he had used his position to help a political ally by investigating the ally’s opponent.

Thompson resigned from his law firm after his arrest in 2017 for allegedly stalking the girlfriend. He was arrested last summer after a judge revoked bond on the stalking charge. He was in his car holding a gun to his head and surrounded by suicide notes at the time of the July 2018 arrest, according to reports at the time by the Atlanta Journal-Constitution and the Brunswick News.

Thompson had been accused of parking outside the girlfriend’s house, following her in his car, nearly ramming her vehicle with his car, and knocking on her door. He also was accused of threatening legal action against her.

Thompson was sentenced in February to three years in prison and 17 years of probation. During that period, he is barred from contacting his former girlfriend, her husband and their attorney, according to the Daily Report Online. He is also banned from his hometown of Vidalia and the Brunswick Judicial Circuit during his probation. He was granted first offender status, which means that his conviction would be expunged after completing the sentence.

Thompson has been in jail since last July. With credit for time served, he is eligible for parole in two months, when he will have served a third of his jail sentence.