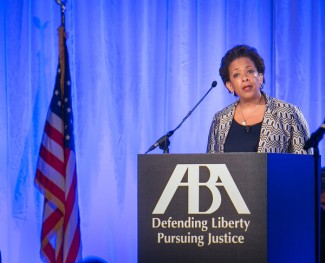 The General Assembly of the ABA Annual Meeting in Chicago on Saturday afternoon featured two women whose accomplishments have made significant history: Roberta Cooper Ramo, the first of now several women to become the association’s president, was presented its highest honor, the ABA Medal; and Loretta Lynch, who earlier this year became the first African-American woman to be named U.S. attorney general, gave the keynote address.

Ramo’s acceptance speech was a rousing recitation of how much others had done to help her in her career and public interest work, and Lynch gave a spirited overview of the DOJ’s efforts to end over-incarceration, combat terrorism—particularly cyberattacks—and, in a comprehensive community relations program in cities around the country, heal the divide and mistrust between law enforcement and communities of color. 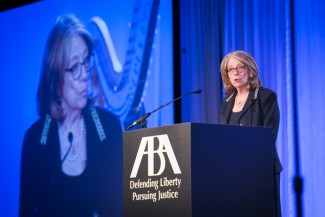 Roberta Cooper Ramo, recipient of the ABA Medal and the first of now several women to become ABA president.

Updated Aug. 3 to include videos of speeches by Lynch and Ramo.

Ramo was one of just six women in her graduating class at the University of Chicago Law School in 1967. She brought to law firms an orderliness and efficiency gained as a youngster in her family’s growing retail business in New Mexico. An early techie, Ramo published a successful book through the ABA in 1975, How to Create a System for the Law Office. She was chosen as the first woman to chair of what is now the ABA Law Practice Division for 1983-84. That substantive practice area experience and work became her path—a somewhat new route from the then-traditional state bar path—to the ABA presidency in 1995-96.

Ramo set out on a signature effort that year with the creation of the Commission on Domestic and Sexual Violence. But she also worked long hours during her term in the battle to save the Legal Services Corp., which had been targeted for elimination in an effort led by Newt Gingrich, then the speaker of the House of Representatives.

A longtime partner at Albuquerque, New Mexico’s Modrall Sperling, Ramo, 73, has continued growing her long list of accomplishments, including new firsts. She became president of the American Law Institute in 2008 and continues in that position. She also is a member of the American Academy of Arts and Sciences. She was appointed by the U.S. Senate to co-chair a committee reviewing governance of the U.S. Olympic Committee in 2003 after a scandal.

In her acceptance speech, Ramo told the assembly she had looked back at the list of previous winners and found something in common with Supreme Court Justice Ruth Bader Ginsburg and retired Justice Sandra Day O’Connor: “A wonderful feminist husband.”

Ramo told the gathering that many, many lawyers and others who had worked with her in public interest matters were responsible for the award, but she wanted to note three in particular. The first was the dean at her law school, who found out she was having difficulty finding work after moving to North Carolina, where her husband, a cardiologist, had taken a job. The dean called his friend, Terry Sanford, who had just finished his term as governor and was about to become president of Duke University. Sanford helped Ramo get a job working to end racial discrimination and teaching constitutional law at predominantly black Shaw University.

Ramo’s next inspiration was the mother of famed golfer Nancy Lopez, whom Ramo represented when Lopez—although a national champion among girls—was not permitted to play on her high school team with the boys. Ramo eventually got a settlement offer that would permit any girl who is a national champion in a sport to play on the boys’ teams. When she flew to Roswell, New Mexico, to relay the news, the girl’s mother asked “if the little girls could play tennis.” When Ramo answered no, the woman said, “Get back on that airplane and don’t come back until all the girls can play.” 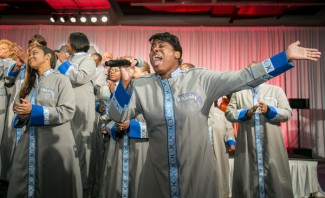 The Chicago Mass Choir performed at the General Assembly.

And, finally, the Rev. Dr. Martin Luther King. As a law student in 1966, Ramo got a fellowship to work for the American Civil Liberties Union and found herself alone in the office when five young black men who came to Chicago with King were arrested for loitering. She got them out of jail but had to borrow cab fare from them. She went to a crowded apartment on the South Side to repay them, and King was there in the kitchen, addressing a large group. “Don’t despair,” he said. “The lawyers and the United States Constitution are on our side, and our lawyers will make sure the United States Supreme Court will hear us now.”

Ramo told the assembly: “So now, I give this medal and all it carries with it—a history and responsibility—back to each lawyer and each judge sitting in this room today.”

Attorney General Lynch received a standing ovation when she went up on the dais. Praising the association for its work on behalf of liberty and justice, Lynch said the program announced at the association’s annual meeting two years ago by then-Attorney General Eric Holder—for reorienting the criminal justice system and getting away from harsh mandatory sentences for minor drug offenses—has, with the ABA’s help, “been a resounding success” through bipartisan efforts.

Lynch detailed other efforts to stem terrorism, with safeguarding the homeland as her “highest priority.” She mentioned the increase in cyberattacks, from Sony to the government itself, and said U.S. Department of Justice officials have been meeting with corporate counsel and business executives for public-private collaboration in the efforts. She also spoke about continuing campaigns against human trafficking, especially of young women, and thanked the ABA for its help in that area.

Lastly, Lynch spoke about initiatives to heal relations between law enforcement and communities of color. She said she has always respected law officers who daily put their lives in danger to protect us, “but I also recognize that, in such a diverse nation with our complex racial history, we must do more to ensure that interactions between officers and communities of color are positive and productive.” The DOJ has joined efforts in several cities, such as Cincinnati and East Haven, Connecticut, where collaboration among stakeholders has been rebuilding trust. Cincinnati, she noted, more recently had another, similar challenge, and the hope is for an “open and transparent process toward justice.”

“In the days ahead, through the strength of our conviction, the force of our actions and the power of our just cause,” Lynch said, “we will make the difference that our citizens need.”

Updated Aug. 3 to include videos of Lynch’s and Ramo’s speeches.