'Groveland Four' were wrongly accused in 1949, prosecutor says in motion to clear their names 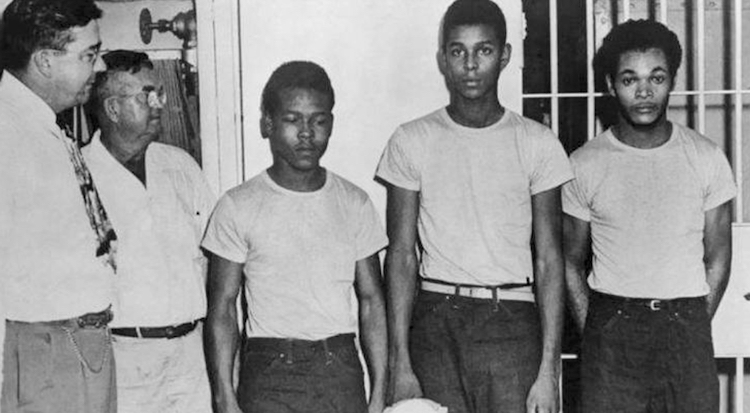 In this undated image, Lake County Sheriff Willis McCall, far left, and an unidentified man stand next to Walter Irvin, Samuel Shepherd and Charles Greenlee in Florida. The three men, along with a fourth, were charged with rape in 1949. Photo from the State Library and Archives of Florida via the Associated Press.

A Florida prosecutor has filed a motion to clear the names of four young Black men known as "the Groveland Four," who were wrongly accused of raping a 17-year-old white woman in Lake County, Florida, in 1949.

State Attorney William Gladson of the Fifth Judicial Circuit filed the motion in state court Monday, according to the Associated Press, the Orlando Sentinel, Fox 35 and a press release. A University of Massachusetts Law Review article has this historical background.

Gladson is also asking to set aside the judgments and sentences of Charles Greenlee and Walter Irvin, who was also shot in the transport van incident but managed to survive. Irvin was paroled in 1968 and died the next year. Greenlee was paroled in 1962 and died in 2012.

Shepherd and Irvin were in the transport van on their way to arraignment after the U.S. Supreme Court vacated their death sentences and ordered a new trial. Thurgood Marshall was one of Irvin’s lawyers at the retrial, which ended with a guilty verdict by an all-white jury.

Then-Florida Attorney General Pam Bondi had ordered a review of the case in 2018. The state agency conducting the review referred the case to Gladson.

The grandson of the Groveland Four prosecutor found letters that led him to think that his grandfather and the judge knew by the second trial that there was no rape.

The grandson also cited evidence indicating that the sheriff was involved in an illegal gambling operation that also involved Shepherd and Irvin, the two men shot in the transport van.

The grandson said his grandfather was having detectives investigate the sheriff.

His grandfather thought that the sheriff was “eliminating competition,” and the whole case was “a way to get some people that were on [the sheriff’s] s- - - list,” the grandson said.

Investigators sent Irvin’s pants to a crime lab for testing, and no semen was detected. At Irvin’s second trial, the prosecution had referenced “smears” on the pants.

Gladson’s motion said he has not witnessed “a more complete breakdown of the criminal justice system.”

“Given these facts today, no fair-minded prosecutor would even consider filing these charges and no reasonable jury would convict,” Gladson wrote. “The evidence strongly suggests that the sheriff, the judge and the prosecutor all but ensured guilty verdicts in this case.”