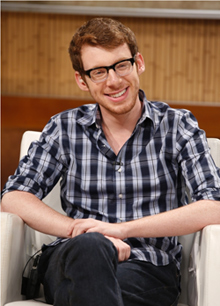 A Harvard law student who wrote a prizewinning class paper about the show Survivor became a contestant and won $1 million in the Sunday finale of Survivor: Caramoan.

CBS Miami describes winner John Cochran as “skinny, pale, non-threatening,” but says he managed to win physical challenges and mental tests. “On the one hand, you could I’m say not a threat; nobody bothered voting for me because I’m such a loser,” Cochran told the Hollywood Reporter. “But I’m kind of a winner now, so maybe they should have voted against me.”

It was Cochran’s second time on Survivor after previously competing on Survivor: South Pacific. He told the Hollywood Reporter he would like to spend some of the prize money on a Segway, a new apartment, investments and “a lot of wireless gizmos and stuff.”

On the finale, Cochran said he would like to become a writer rather than a lawyer. Asked about his paper about Survivor, Cochran told the Hollywood Reporter it was “basically Survivor for Dummies” and wasn’t that great. He also downplayed the essay in an interview with HitFix.

“It wasn’t showing any great insight into how to manage the Survivor jury,” Cochran said. “It gave maybe a brief overview of maybe what sort of strategies work and what don’t, but it’s not especially insightful. That’s why I haven’t released it. It’s just gonna shatter everyone’s illusions that I’ve written some sort of brilliant thing. It’s not brilliant at all. It’s embarrassing, so I’m gonna keep it a mystery.”

Reality TV World asked Cochran about what sort of writing he’d like to do in the future.

“The great thing, or one of many great things, about winning Survivor is that now I kind of have this safety net where I am not—there is no urgency for me to run off and get some high-paying miserable law job,” Cochran told Reality TV World. “I can experiment with different types of writing. I think I’m a good writer, you know?”

Cochran spoke with the Harvard Law Record after his first Survivor appearance. “As goofy as it sounds, Survivor really did change me in many ways,” he said. “I think a big thing that changed is that, like many (if not most) law students, I’m generally a pretty risk-averse kind of guy. There’s something easy and appealing about the path law school, and especially a good school like Harvard, affords you. Go to school, work at a big law firm for a few years, go in-house somewhere. Survivor was such a big detour for me, though, that now I feel a little more comfortable with the idea of straying from that path.”