How Brown v. Board of Education shaped Michelle Obama's life 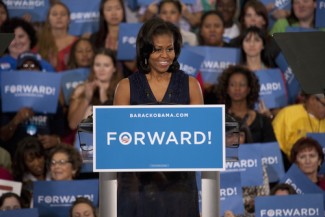 Michelle Obama will visit Topeka, Kansas, today to meet with students on the eve of the 60th anniversary of Brown v. Board of Education, a case that shaped her own life.

Brown was a consolidation of five cases challenging segregated schools, including one in Topeka. While in Topeka, Michelle Obama will visit a former all-black school that is now the Brown v. Board of Education National Historic Site and will encourage students to aim high, the New York Times reports.

In 1975, Chicago responded to pressure to comply with Brown v. Board of Education by opening a racially integrated school for high achievers, the Whitney M. Young Magnet High School. Michelle Obama won admission, riding on a bus for an hour or more to get to the school.

Michelle Obama has said Whitney Young paved the way for her admission to Princeton University and Harvard Law School. But even at Whitney Young, Obama has recalled, some sought to lower her expectations when she expressed interest in Ivy League colleges.

“Get this,” Michelle Obama told one group of high-school students last year. “Some of my teachers straight up told me that I was setting my sights too high.”