Judge is censured for 'crass' and 'sexist' remarks, comment with 'racial overtones' 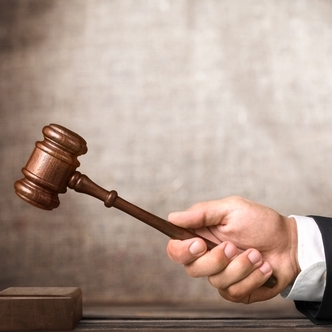 A California judge has been censured after commenting on “smoking hot” women, proclaiming that he had the "biggest balls in the courthouse" and making other inappropriate remarks.

Judge Jeffrey Bennett of Ventura County stipulated to the allegations and agreed to the reprimand, report Law.com and Law360.

The California Commission on Judicial Performance released its March 10 decision and reprimand order on Wednesday.

“Judge Bennett’s misconduct mostly involves saying things no judge should say—comments and remarks that are offensive, undignified, discourteous, dishonest, sexist, profane, and create the appearance of bias and retaliation,” the commission said.

In addition, Bennett’s comment to a black defendant “reflects a disregard for the racial overtones of such a remark and manifests insensitivity to individuals appearing in court before him,” the commission said.

Bennett had told the black defendant he should stop “shucking and jiving” after the defendant gave what Bennett believed to be evasive answers.

The commission also said that Bennett:

• Said in front of a prosecutor that he was the “only one in the courthouse with the balls to make a ruling,” or words to that effect. He also told attorneys in a courthouse hallway something to the effect of: “I have the biggest balls in the courthouse. I’m probably the only judge who has the balls to admit when I’ve made the wrong decision.”

• Said in a courtroom conversation that “chicks” really liked the Rolls-Royce he had washed for the owner and driven to a coffee shop. He also told a prosecutor and lawyer in chambers that he wouldn’t spend so much time with the telescope he installed on his roof if he had “a 20-year-old smoking hot blonde wife,” or words to that effect.

• Told lawyers in his chambers that he prefers to take his flu shot “in the ass,” told a prosecutor in chambers that she was taking a “chicken shit position,” and told two prosecutors that another prosecutor handling a hearing before him was “dumb as shit.”

• Told lawyers during a trial that he didn’t care about them, but he did care about jurors because they are voters.

• Excluded evidence from the state attorney general’s office and told the prosecutor who objected, “You can tell [California Attorney General Xavier] Becerra that’s what he gets for going against my president,” or words to that effect.

• Told a prosecutor after a hearing that she didn’t have to “act like a scared little girl in my courtroom.”

• Told a prosecutor he wasn’t sure if he wanted to shake his hand because the judge believed the prosecutor was the source of a prior complaint to the judicial commission. Bennett falsely stated he spent $10,000 for his defense in the matter.

Judges are “expected to display appropriate demeanor and decorum, and not to use crass or sexist words and imagery, as Judge Bennett has done,” the commission said.

“For example, Judge Bennett’s references to his ‘balls’ and his ‘ass’ diminish the dignity of his office. His gratuitous comments about ‘chicks’ liking a car, and to not spending so much time with his telescope if he had a “20-year-old smoking hot wife,’ are sexist and unseemly. His use of profanity, such as ‘f- - -ing’ and ‘shit,’ degrades the decorum of the court and reflects negatively on the judiciary. …

“Finally, Judge Bennett’s pattern of undignified, discourteous, and offensive remarks to and about prosecutors not only creates the appearance of bias against them, but also undermines public perception of the integrity and impartiality of the judiciary.”

The commission said Bennett’s acknowledgement of almost every ethics allegation was a significant mitigating factor. An aggravating factor was a prior advisory letter he received for making discourteous and undignified remarks.

The advisory letter concerned these remarks to a defendant: “He’s a dirtbag of the highest order … What’s kind of burning me up right now is the fact that he was paid more than I’m paid to sell cars, and then he stole money on top of it. How pathetic is that? You are really a piece of work.”

According to Law.com, Bennett’s lawyers at Klinedinst have described him as a “straightforward and honest” man with a “refreshing ‘tell-it-like-it-is’ approach to life.”

In a statement, the lawyers said Bennett “has accepted this censure, taken full responsibility for his conduct, and is committed to improving as a judicial officer.”