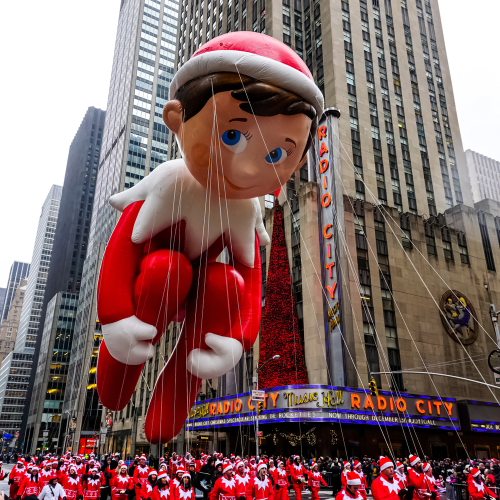 A balloon of the Elf on the Shelf floats in the air during the Macy’s Thanksgiving Day Parade in New York in November 2014. Photo from Shutterstock.

A judge in Cobb County, Georgia, is getting national attention after he tweeted a mock order banning the Elf on the Shelf in his jurisdiction.

Chief Judge Robert D. Leonard II banned the holiday tradition in Cobb County while adding that there would be “no contempts” for those who disobey.

Above the Law, the Associated Press, Patch, the Washington Post and the Today show on NBC have coverage.

According to Elf on the Shelf legend, the elf is sent to homes to watch children by day. At night, they return to the North Pole to report whether children were naughty or nice, according to an explanation from HuffPost. The elf does not move while children are awake, but it moves to a new position after its nightly trip to the North Pole.

The elf will lose its magic, however, if it is touched by a child. Leonard noted the trauma caused when the elf does not move at night.

“The court finds ‘the Elf on the Shelf,’ hereinafter ‘Elves,’ represent a distraction to school students and a risk to the emotional health and well-being of Cobb’s young children,” Leonard wrote. “Inexplicably, Elves sometimes move and don’t move overnight. When these Elves do not move, it leaves our children of tender years in states of extreme emotional distress.

“The undersigned recalls a horrific incident in our own home, where three children were sent to school in tears, with one child being labeled an ‘elf murderer’ and accused of making the elf ‘lose his magic.’”

Leonard went on to opine that he had no doubt that the day of education was lost.

Leonard told the Atlanta Journal-Constitution that he wrote the order after a social media conversation about elf bloopers. His tweet said the order was for those “tired of living in Elf on the Shelf tyranny.” His order, he tweeted, was a “gift to tired parents” who weren’t looking forward to the elf forgetting to move and causing their children emotional distress.

The elf tradition stemmed from a book written in 2005 by two Cobb County natives, Patch reports. The Elf on the Shelf toy and book are produced by the Lumistella Co.

The company responded to Leonard’s order in a statement.

“On behalf of the Elf on the Shelf Scout Elves, Santa would like to assure the children and families of Cobb County that the honorable Judge Leonard has no jurisdiction over Christmas cheer,” the statement said.

The company added a P.S., however.

“Santa has checked his list twice, and Judge Leonard is still on the ‘nice’ list. Despite this silly jest, his Scout Elf reports he’s actually a jolly good fellow,” the company said.