Judge was among Kentucky tornado victims; courthouse and law offices are damaged 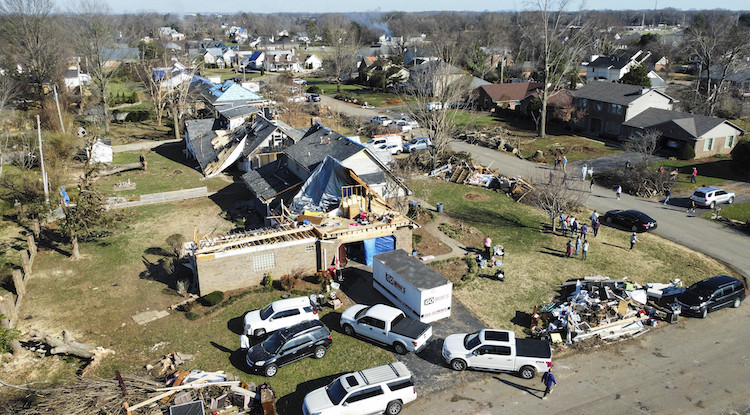 Recovery efforts continued this week for Bowling Green, Kentucky, residents living in the Briarwood neighborhood following the tornado and severe storms that hit the city and other parts of Kentucky last week. Photo by Grace Ramey/The Daily News via the Associated Press.

The tornadoes that devastated Kentucky on Friday damaged a courthouse and lawyers’ offices and took the life of a judge.

Law.com has a story on the tornado’s impact on the legal profession in Mayfield, Kentucky, and other Kentucky towns.

At least 74 people died in Kentucky, according to a Louisville Courier Journal story published Wednesday. Among the dead were Judge Brian Crick of the 45th District Court, who lived in Bremen, Kentucky, report Law.com, Heavy.com and Kentucky.com.

The Kentucky Supreme Court issued an order Sunday legally closing the Graves County Courthouse in Mayfield after it sustained “irreparable structural damage.” The order allows deadlines to be tolled.

The Mayfield law office of Neely, Brien, Wilson & Toombs was also destroyed. Name partner Bo Neely told Law.com that some documents with the firm’s letterhead were found as far as 100 miles away. Other lawyers also told the publication that their offices had significant damage.

Richie Kemp, the Graves County Commonwealth’s attorney for the 52nd Judicial Circuit, told Law.com that the rubber roof of the prosecution office was torn off, leading water to seep in through the ceiling. The office shares space with Kemp’s private office. Important documents have been removed, but Kemp is searching for additional space.

Kemp told Law.com that volunteers are offering help throughout the town.

“The legal community, everybody, has each other’s back,” Kemp said. “As a prosecutor, you can get kind of cynical about people and their behavior and how they treat each other. But seeing something like this, it reminds me that there’s a lot of good out there. People from all across the country are reaching out, wanting to help. It’s pretty amazing.”