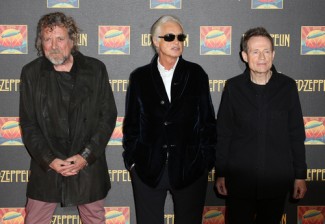 A federal judge in Los Angeles has refused to toss a lawsuit claiming Led Zeppelin copied part of another band’s song in “Stairway to Heaven.”

Klausner said there was enough of a substantial similarity between the first two minutes of “Stairway” and the song “Taurus” by the band Spirit to allow a trial.

The suit was filed by the trustee for the late Spirit guitarist Randy Wolfe, who composed “Taurus.” The trustee alleged that Led Zeppelin members heard the tune in 1968 and 1969 when the bands appeared at the same venues on the same days. “Stairway to Heaven” was remastered and re-released in May 2014, 43 years after its initial release.

The trustee had argued that Wolfe composed the song for his future wife in 1966, before signing a contract with Hollenbeck Music that made him an exclusive songwriter for hire with the company.

Klausner allowed the copyright claim against Led Zeppelin singer Robert Plant and guitarist Jimmy Page. He said there was a triable issue of fact on whether “Taurus” was composed before Wolfe signed the songwriter agreement. He also found a triable issue on substantial similarity between the songs in their opening chords.

“While it is true that a descending chromatic four-chord progression is a common convention that abounds in the music industry, the similarities here transcend this core structure,” Klausner wrote.

The plaintiff’s complaint (which used Led Zeppelin’s iconic font) can be read here.