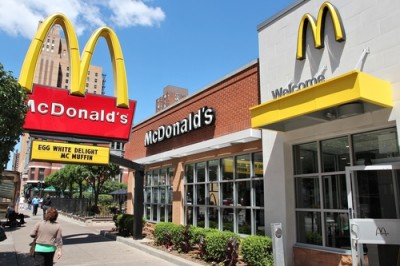 A McDonald’s in Chicago. (Shutterstock.com.)

McDonald’s didn’t violate Illinois consumer law by marketing “extra value meals” that cost more than when the items are purchased a la carte, a federal judge has ruled.

U.S. District Judge Elaine Bucklo tossed the would-be class action last Friday. Eater links to the decision, while the Associated Press has a story based on a Chicago Daily Law Bulletin report.

The woman who filed the would-be class action, Kelly Killeen, said she purchased a sausage burrito extra value meal—two burritos, hash browns and coffee—at a Chicago McDonald’s for $5.08 when she would have paid $4.97 had she ordered the items individually.

Killeen’s theory “has superficial appeal,” but there is no possibility for deception because consumers could look at the menu and do the math themselves, Bucklo said.

This isn’t a case where a consumer would have to consult an ingredients list or other fine print to determine whether a label accurately reflects a product’s true nature or quality, according to Bucklo’s opinion. Anyone who visits a fast-food restaurant knows that prices are typically displayed on menus near the registers.

“Understandably, plaintiff may not have wished to take the time to compare prices,” Bucklo wrote, “but there is no question that doing so would have dispelled the deception on which her claims are based.”