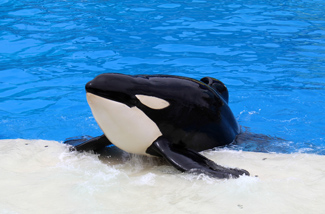 An orca whale at SeaWorld in San Diego. Tinseltown / Shutterstock.com.

A federal judge in San Diego has dismissed three combined lawsuits that contended SeaWorld visitors are wrongly lured to the parks as a result of false claims that its orca whales are well-treated.

The plaintiffs also alleged SeaWorld had failed to disclose information about the whales’ health, but the company had no duty to disclose such information, Bencivengo wrote.

A holding to the contrary “would effectively require any company selling any product or service to affirmatively disclose every conceivable piece of information about that product or service (or even about the company generally) because inevitably some customer would find such information relevant to his or her purchase,” Bencivengo said.

“That the whales themselves do not have standing to contest their conditions of captivity does not change the analysis or give plaintiffs any more standing to assert omission claims than they would have to sue SeaWorld for omitting information about SeaWorld’s treatment or compensation of its human employees,” Bencivengo wrote.

The suits were filed by five SeaWorld visitors on behalf of those who went to the parks in San Antonio, San Diego and Orlando, Florida.

SeaWorld spokesman David Koontz told the Los Angeles Times the suits were part of an effort to eliminate zoos and aquariums. But “SeaWorld and other science-based organizations are part of the solution, not the problem,” he said. “Orcas at SeaWorld are healthy and thriving.”

“SeaWorld welcomes this significant decision, which threw out all of the plaintiffs’ claims, and which could signal the ultimate end of this litigation,” Koontz said.