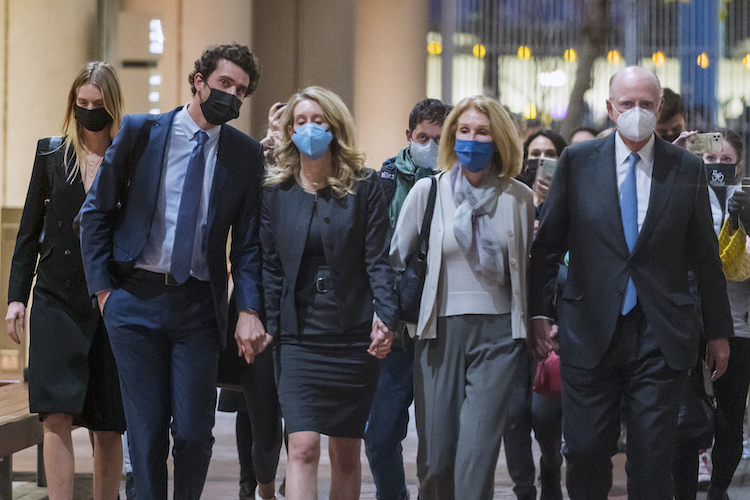 A jury on Monday found Elizabeth Holmes, the former CEO and founder of failed blood-testing startup Theranos, guilty on four of 11 federal charges related to fraud and conspiracy.

The New York Times, CNN, Time, Reuters and NBC News have coverage of the verdict.

Holmes and Ramesh “Sunny” Balwani, the former president and chief operating officer of Theranos, were indicted in 2018 after prosecutors alleged that they knew that the company’s proprietary blood analyzer couldn’t consistently produce accurate and reliable results for certain tests but claimed that it was more accurate and reliable than traditional testing methods.

Prosecutors claimed that Holmes and Balwani—who were romantically involved at the time—misled doctors and investors, as well as patients who purchased the blood tests at Walgreens.

Holmes’ trial began in August, and after seven days of deliberations, jurors found her guilty of one count of conspiracy to defraud investors and three counts of wire fraud that were connected to individual investors. She faces up to 20 years in prison and a fine of $250,000 plus restitution for each of the four counts.

The jury found Holmes not guilty on three charges related to defrauding patients and one charge of conspiracy to defraud patients. It could not reach a verdict on three other counts of wire fraud related to specific investors.

According to CNN, U.S. Attorney Stephanie Hinds of the Northern District of California said in a statement read outside the federal courthouse in San Jose, California, “the guilty verdicts in this case reflect Ms. Holmes’ culpability in this large-scale investor fraud, and she must now face sentencing for her crimes.”

Holmes was 19 when she founded Theranos in 2003. Reuters reports that she attracted high-profile board members and investors, including billionaire media mogul Rupert Murdoch, and Forbes estimated her net worth at $4.5 billion by 2015.

The company dissolved in 2018 after an investigation by the Wall Street Journal cast doubt on the accuracy of its blood-testing device and found that it often relied on third-party machinery from traditional blood-testing companies. Holmes settled civil fraud charges filed by the U.S. Securities and Exchange Commission, but she never admitted wrongdoing.

George Demos, a former SEC prosecutor and an adjunct professor at the University of California at Davis School of Law, told CNN that the verdict was “a significant win for the government and sends a powerful signal to Silicon Valley that fraud cannot masquerade as innovation.”

Neither Holmes nor her counsel commented after the verdict. Reuters reports that while testifying in her own defense during trial, Holmes said she never meant to deceive anyone, and that her company’s lab directors were responsible for test quality.

CNN also reports that Holmes testified that Balwani was her most important adviser, but he was controlling and abusive.

“He impacted everything about who I was, and I don’t fully understand that,” Holmes said, according to CNN.

Balwani, who also pleaded not guilty to the fraud and conspiracy charges, will be tried later this year.

ABAJournal.com: “Judge scrutinizes BigLaw firm in ruling on evidence from blood-testing company Theranos that may be ‘irretrievably’ lost”