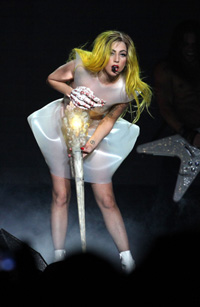 Lady Gaga told an opposing lawyer during a deposition just what she thought of his case, an overtime suit filed on behalf of a former Gaga assistant.

“This whole case is bulls—t and you know it,” Gaga told lawyer Paul Millus in an Aug. 6, profanity-laced deposition obtained through court records. Above the Law notes the story by the New York Post; People also has coverage.

Millus is among the lawyers representing Jennifer O’Neill, who claims Gaga—whose real name is Stefani Germanotta—owes her more than more than $393,000 for 7,168 hours of unpaid overtime racked up while working as the star’s personal assistant. O’Neill was paid a salary of $75,000 a year.

Gaga said her employees work no more than eight hours daily, though the time is spaced out throughout the day. “You don’t get a schedule that is like you punch in and you can play f—ing Tetris at your desk for four hours and then you punch out at the end of the day,” Gaga said. “This is—when I need you, you’re available.”