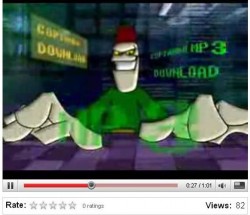 Professor and assistant dean James Cooper sketched his idea on Thursday at a comic book convention, the Daily Journal reports (sub. req.). “I’d take the top 15 cases of tort law–famous cases in history–animate them and get them on the Web–YouTube,” he said.

Cooper said he has met with various movie studios in an effort to get financing for the project.

“For over 150 years, law has been taught the same way,” he said. “We take appellate court decisions, and we extract certain legal principles and doctrines. But you can’t ignore pop culture.”

Cooper is also trying to promote the rule of law in Latin America through a group he co-founded, Proyecto Acceso, that seeks to inform through projects ranging from a CD of legal songs to a fashion show at a women’s prison.

Several of Cooper’s YouTube videos, including IP PSA, can be accessed through his California Western faculty site.