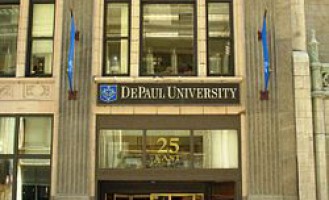 Nine students at DePaul University’s College of Law in Chicago have complained to the dean about a professor’s use of the N-word in a criminal law hypothetical about a white supremacist.

Professor Donald Hermann tells the Sun-Times he used the word last Thursday in this hypothetical: A white supremacist at a funeral of a civil rights leader uses the N-word, causing the crowd to come after him. If the white supremacist shoots and kills someone, can he claim self-defense?

The answer, Hermann says, is that the white supremacist is guilty of murder because he was the aggressor. “My argument was that almost every other slur would not be enough in a similar context to make the harasser an aggressor,” he said.

Using an alternate word to describe the slur “waters down the discussion and the significance of the word,” he said.

Hermann told the Sun-Times and Crain’s that students will encounter the racial slur if they pursue a career in criminal law. “If this word interferes with their functioning, being a lawyer is probably not a thing they should be doing,” he told Crain’s.

Days before Hermann used the N-word in class, students had complained about his use of other disparaging terms.