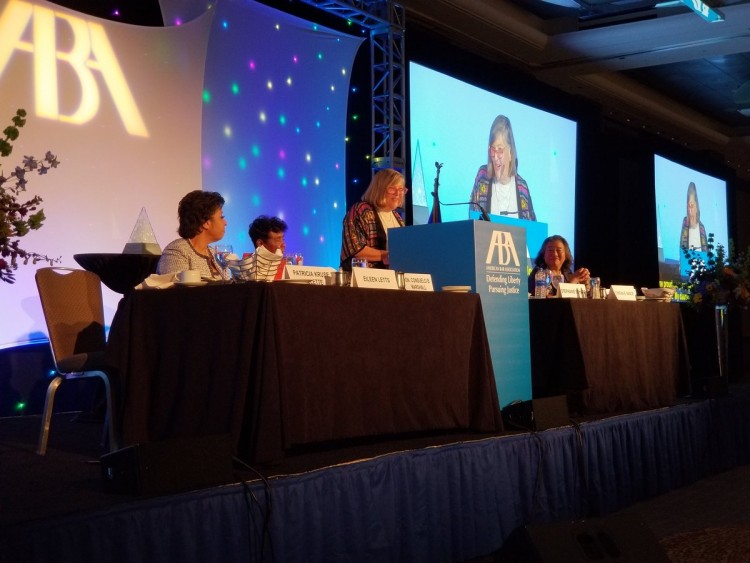 The Margaret Brent Women Lawyers of Achievement Award luncheon is a highlight of the ABA Annual Meeting.

Sunday’s packed event in Chicago was no exception, with five legal trailblazers rallying the crowd to make a difference, elevate the status of women and girls and make a stand for the rule of law.

This year’s recipients include top litigators, jurists and women fighting for equal rights, social justice and inclusion. They are:

Tchen, who also heads Buckley Sandler’s Chicago office, warned attendees that the country is at a historic crossroads and struggle, with the rule of law under threat as never before, adding that “history will judge all of us by what we do now.”

“Now is the time to speak out, to act out, to take whatever action we can to protect our democracy,” said Tchen, who previously served as an assistant to President Barack Obama, chief of staff to first lady Michelle Obama and executive director of the White House Council on Women and Girls.

Tchen suggested the most fitting tribute to Margaret Brent would be for lawyers to “commit ourselves to the fight of our lives.”

The Brent award is named after the first woman lawyer in America, who arrived in the colonies in 1638. Brent was a master negotiator, an accomplished litigator and a respected leader. The ABA Commission on Women in the Profession established the award in 1991 to recognize and celebrate the accomplishments of women lawyers who have excelled in their specialties and in the legal field, paving a path and setting an example for other women lawyers.

During her acceptance speech, Nance related how she’d attended the Margaret Brent luncheon many times, each time leaving the event with a call to action and a feeling of empowerment.

“I encourage you to give back,” she said. “I wouldn’t be here today if it were not for many of the people in this room who have encouraged and supported me in my career—and in my life.”

Nance told a story about meeting and befriending servers in a restaurant she frequented and helping them realize their dream of attending law school.

Next:
President says meeting to get dirt on Clinton was legal; was admission problematic?