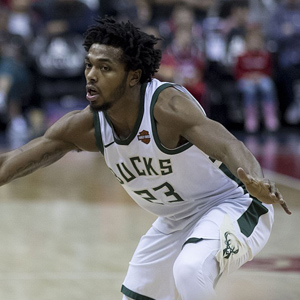 Milwaukee Bucks rookie guard Sterling Brown filed a federal civil rights lawsuit on Tuesday that alleges Milwaukee police used excessive force when they shocked him with a stun gun and then unlawfully arrested him for parking across two handicapped parking spaces.

The suit says Brown was “unlawfully tackled, tased, and cuffed over an alleged parking incident.” ESPN, Wisconsin Public Radio and the Milwaukee Journal Sentinel have coverage.

Police used the stun gun on Jan. 26 after Brown had parked a loaner Mercedes-Benz outside a drugstore, according to the lawsuit.

The suit describes the incident this way: The first officer who approached Brown didn’t identify himself as a law enforcement officer, began to question Brown and shoved him. Brown “remained calm and peaceful,” the suit says. The officer called for backup. Three minutes later, several police vehicles arrived on the scene.

Six officers surrounded Brown, and two officers peering into the car saw paper targets with bullet holes in them. In response to a question, Brown said he had no guns. Officers told Brown to take his hands out of his pockets, and one officer drew a gun. Before Brown “had any real opportunity to comply,” an officer kneed Brown in the groin and threw him to the pavement, the suit says.

As Brown remained on the ground, an officer twice used a Taser on Brown’s back, while another officer stomped on his leg, the suit says. Police took Brown to the hospital, where he was treated for facial abrasions and two puncture wounds to his back. He was transferred to the Milwaukee County Jail and later released.

The suit cites Facebook posts by one of the officers. One of them read: “Nice meeting Sterling Brown of the Milwaukee Bucks at work this morning! Lol#FearTheDeer.” The hashtag refers to a slogan used to support the team.

In another post, the officer referred to a player on the Cleveland Cavaliers. “I hope JR Smith double parks in Walgreens handicap Parkin spots when he’s in Milwaukee,” the post said.

Three officers received suspensions ranging from two to 15 days after the incident.

Previous:
Educating the community about judicial independence can help preserve it