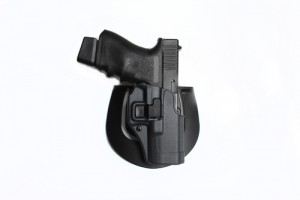 A Las Vegas lawyer who was acting as his own lawyer in a defamation lawsuit acknowledges he had a gun during a deposition, but denies the opposing lawyer’s allegation that he pulled it out as the proceeding grew contentious.

Hayes’ motion says he and his client are uncertain whether Pengilly actually aimed the gun at them “as they were trying to gather their belongings and get out of the deposition room.” According to a transcript, the court reporter continued to record the conversation even after Pengilly allegedly displayed the gun. Above the Law and KTNV have stories; Above the Law has the motion and transcript here.

Hayes is asking the court to sanction Pengilly with fines and an award of attorney fees of at least $5,000. Las Vegas police are investigating, according to the Review-Journal.

Pengilly told the Review-Journal that he carries a gun because his father worked in a San Francisco law firm where a gunman killed eight people. “I have it every day, all day,” he said. “I always carry a gun because I’m an attorney and people don’t like me.”

Hayes’ motion alleges that Pengilly spoke to Hayes’ client in “an aggressive and snarly tone” as the deposition began, and later called the client a “dipshit” and “Big Bird.” The court reporter captured the exchange.

Pengilly began the deposition with this question, posed to Hayes’ client: “Why are you suing me?”

Hayes’ client: “Because you made slanderous claims against me that are inaccurate.”

Haye’s client: “You said I didn’t pay HOA dues, which I did, and you also said I do unscrupulous business practices, which I do not.”

Pengilly: “Do you know why everybody at the loft calls you Big Bird?”

Hayes: “Hold on. Before—

Pengilly: “You have no idea?”

Pengilly: “You have no idea?”

Hayes: “I think you’re trying to harass my client.”

Pengilly: “Big Bird. You have no idea why people call you—”

Hayes: “What’s the relevance to this lawsuit?”

Pengilly: “Because apparently somebody thinks they’re entitled to damages, and, in reality, they’re not entitled to anything, because somebody is the dipshit younger brother—”

Hayes’ client: “Did you just call me a dipshit?”

Hayes’ client. “This is over.”

Hayes: “This depo is over.”

Pengilly: “Good for you. Have fun.”

Hayes’ client: “You called me a dipshit, mother——.”

Hayes’ client: “Get my keys. Did you see that?”

Pengilly: “Are you ready for it?”

Pengilly: “Are you ready for it?”

Hayes: “No good—no good can come from this.”

Hayes’ client: “Where are my keys and stuff? Get out of this f—— piece of shit’s office Careful mother—–.”

Hayes: “What are you doing now? If you pull the gun, I’m going to call the police.”

Pengilly continues to order Hayes and his client out of the office. The exchange continues:

Hayes: “Are you recording this?”

Pengilly: “Get out of here.”

Hayes’ client: “You pulled a gun on me, Pengilly.”

Pengilly: “Get out of here. Get out of my office.”

Hayes: “He’s grabbing a gun with his right hand in his back pocket.”

Hayes’ client: “He’s got a gun in his back pocket. The mother—— comes to a deposition with a gun.”

Pengilly: “I have a CCW [concealed carry weapon] dumbass.”

Hayes and his client leave.

Court reporter: “Are we off now?”

Pengilly, Hayes and the court reporter did not immediately respond to the ABA Journal’s request for comment.

Pengilly told the Review-Journal that the gun allegations are a delay tactic. “I’ve been setting their depositions for years, and they refuse to show up. They have no evidence. They have nothing,” he said.

He also said the man who is suing him, as well as the man’s brother, are both “hotheads” who have threatened to beat him up in the past.