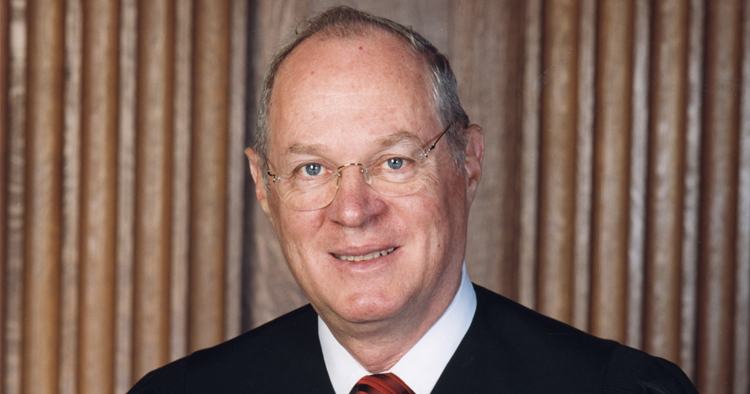 U.S. Supreme Court Justice Anthony Kennedy. Photo from collection of the Supreme Court of the United States, via Wikimedia Commons.

Speculation about the retirement of Justice Anthony M. Kennedy has been rampant since President Donald J. Trump took office in 2017. Kennedy invited the president’s daughter Ivanka to an oral argument at the court soon after the inauguration.

And Kennedy swore in Justice Neil M. Gorsuch at the White House, where President Trump had a chance to make Kennedy more comfortable about stepping down.

But last June came and went without any action, and Kennedy was back on the bench for this busy term. This spring brought further speculation but not any major hints from the inscrutable 81-year-old justice, who surpassed 30 years on the court in February.

On June 27, the last day of the term, guests began rolling into the courtroom, including lawyers and litigants from the remaining cases, tourists and spouses of the justices.

When Kennedy’s wife, Mary, and what appeared to be several of his grandchildren, all smartly dressed, arrived in the minutes before the justices took the bench, reporters in the room immediately felt a twinge, a hint that the long-rumored departure might indeed soon happen.

And indeed it did. At the routine end-of-term conference with his fellow justices, Kennedy was said to have told them for the first time. And then the justice was off to the White House, where he managed to slip in unnoticed by the huge press corps and hand-deliver to the president his “respectful and formal” notification of retirement, effective July 31.

“For a member of the legal profession it is of the highest of honors to serve on this court,” Kennedy’s letter said.

THE SEARCH FOR ‘A GREAT ONE’

The retirement of a justice brings an immediate, intense review of his or her record and legacy. But it also invites the executive and legislative branches to the stage, and their members and interests soon crowd out the outgoing member of the court.

“We have to pick a great one,” President Trump said at a campaign rally in Fargo, N.D., later that day. “We have to pick one that’s going to be there 40 years, 45 years.”

Vice President Mike Pence tweeted that same day his thanks to Justice Kennedy for his long service, but said the president “will nominate a strong conservative, in the tradition of the late Justice [Antonin] Scalia, who will uphold all the God-given liberties enshrined in the Constitution of the United States.”

In other words, the administration is not particularly looking for a justice in the tradition of Justice Kennedy, which to conservatives meant someone who was far too unreliable on social issues such as abortion, gay rights, affirmative action, and certain criminal justice issues.

Leonard Leo, who is once again taking a leave as executive vice president of the Federalist Society to advise Trump on the vacancy, says, “I expect the nominee to be like Justice Gorsuch.”

Leo was involved in developing the list of potential nominees when Trump chose Gorsuch to fill the vacancy created by Scalia’s death in 2016. The list has been expanded since last year, but among the top names are Brett Kavanaugh of the U.S. Court of Appeals for the District of Columbia Circuit, a former Kennedy clerk and White House aide to President George W. Bush; Amul Thapar of the 6th U.S.Circuit Court of Appeals, said to be a favorite of Senate Majority Leader Mitch McConnell, R-Ky.; and Amy Coney Barrett of the 7th U.S. Circuit Court of Appeals, who just joined that appellate court this year after a bruising confirmation fight. She would arguably be the most conservative choice and most antagonistic to Democrats.

As for the legislative branch, McConnell has vowed a vote on the president’s nominee before the midterm elections, while Democrats are openly asking why the process shouldn’t be delayed the way McConnell blocked a vote on President Barack Obama’s nominee to replace Scalia, Merrick B. Garland.

One curiosity about Kennedy’s retirement is that he did not follow the pattern observed by four of the last five justices to retire from the court and announce his plans to depart by April or May, giving the political branches time to get the ball rolling on a successor while finishing out the term. (Justice Sandra Day O’Connor was the last to wait for term’s end, in 2005, and she was waiting to see whether Chief Justice William H. Rehnquist would step down. Rehnquist, battling cancer, refused to retire but died that September, which prompted O’Connor to serve for several more months.)

By waiting until the end of the term, Kennedy allowed for the same level of extended political fighting that characterized the vacancy he filled. When Justice Lewis F. Powell Jr. retired at the end of the term in 1987, that led to the failed nomination of Judge Robert H. Bork and the withdrawn bid of Judge Douglas Ginsburg, before President Ronald Reagan chose Kennedy, a Sacramento native who Reagan came to know while he was governor of California.

“Justice Kennedy did not make his retirement contingent on the appointment of his successor,” as did Justice O’Connor, says Josh Blackman, a professor at South Texas College of Law Houston, and a frequent commentator on the court who was in the courtroom on Kennedy’s last day. By setting a departure date of July 31, Kennedy “ensures he is around this summer if any emergency applications are filed, but will not be there on the first Monday in October,” when the new term starts, Blackman says.

Kennedy’s legacy is well-known in areas such as gay rights, where he authored four major opinions expanding the rights of LGBT Americans. On abortion, he co-authored the 1992 decision that reaffirmed the basic right established in 1973’s Roe v. Wade, and just two years ago, he voted with the court’s liberal bloc to invalidate measures in Texas that made it more difficult for physicians and clinics to provide abortions. But he also wrote the opinion for the court in 2007 upholding a federal law restricting so-called partial-birth abortion.

Kennedy cast many votes that the public associates with the court’s conservative bloc, such as a vote to end the presidential recount in Florida in Bush v. Gore in 2000, which handed the presidency to Bush, and writing the opinion for the court in Citizens United v. Federal Election Commission, which authorized unlimited independent spending on elections by corporations and unions and has prompted a continuing backlash.

“Justice Kennedy leaves a legacy of limiting federal power and protecting individual liberties,” says Scott A. Keller, the solicitor general of Texas and a former Kennedy clerk, who just this week won a racial gerrymandering decision with Kennedy in the 5-4 majority.

Kenedy was also deeply concerned about the corrections system and the issue of solitary confinement. Kennedy, who spoke multiple times to the annual meeting of the American Bar Association, told the 2003 event in San Francisco that on corrections, “our resources are misspent, our punishments too severe, our sentences too long.”

“As a profession, and as a people, we should know what happens after the prisoner is taken away,” Kennedy told the session. “To be sure the prisoner has violated the social contract; to be sure he must be punished to vindicate the law, to acknowledge the suffering of the victim, and to deter future crimes. Still, the prisoner is a person; still, he or she is part of the family of humankind.”

The ABA established a commission that followed up on Kennedy’s recommendations.

For the past dozen years since O’Connor left the court, Kennedy was at its center on many issues. But he did not like being referred to as the court’s “swing vote.”

“It has this visual image of the spatial gyrations,” Kennedy said at an appearance at his Harvard Law School, in 2015. “The cases swing. I don’t.”