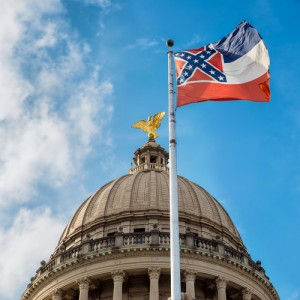 Setting the stage for a showdown between civil rights groups and business owners with religious convictions against same-sex relationships, the governor of Mississippi on Tuesday signed a so-called religious freedom bill into law.

More narrowly drafted than similar laws in some other jurisdictions, the Freedom of Conscience from Government Discrimination Act nonetheless allows those who object to same-sex marriages and/or an individual claiming to be a gender other than what was “objectively determined by anatomy and genetics at birth” to refuse to provide services based on those objections, according the Clarion-Ledger and NPR.

Gov. Phil Bryant, a Republican, said the law protects an individual’s rights to act in a manner consistent with his or her “deeply held religious beliefs.”

However, opponents contend that it infringes on the constitutional and public accommodation rights of same-sex couples and the lesbian, gay, bisexual and transgender community.

While, under the law, an individual could legally refuse to provide a facility for a same-sex wedding or refuse counseling or medical services, the idea is that services are not denied because others are available to provide them, proponents say.

“It specifically says that is a case where a person has a religious conviction, they can decline, but they must provide somebody in their office to provide that service,” state Rep. Andy Gipson, a Republican, told Mississippi Public Broadcasting, referring to same-sex marriages.

“This newly enacted law—like the draconian anti-LGBT laws in other states—uses the guise of ‘religious freedom’ to justify discrimination, mistreatment and bigotry,” said managing attorney Jody Owens of the Southern Poverty Law Center. “It’s the same sort of rationale used by white supremacists in earlier eras to justify slavery and Jim Crow.”

CNN also has a story.

ABA Journal: “States deal with religious and gay rights in the wake of same-sex marriage ruling”