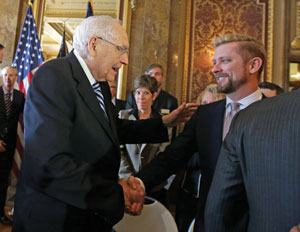 In an attempt to stave off same-sex marriage, many states passed religious freedom restoration acts this year, with language that exempts businesses from providing services to same-sex couples based on the owner’s religious beliefs.

But with the U.S. Supreme Court’s approval of same-sex marriage in Obergefell v. Hodges, issued in June, some wonder how those RFRAs will be enforced, and what other rights—such as spousal health insurance benefits—will be extended to same-sex married couples living in states that don’t prohibit discrimination based on sexual orientation.

“From a legal perspective, marriage equality does not guarantee most anti-discrimination protections for LGBT citizens on the state or federal level,” says Nelson Tebbe, a Brooklyn Law School professor whose work focuses on the relationship between religious traditions and constitutional law.

“It might still be legal for wedding vendors and other service providers to decline services to same-sex couples,” Tebbe says. “It could be possible for employers to deny spousal benefits to same-sex spouses of employees.”

According to the National Conference of State Legislatures, 21 states have RFRAs, and 17 states recently introduced legislation to create or amend existing religious freedom laws. And according to the policy group Center for American Progress, 28 states do not prohibit discrimination based on sexual orientation, and 31 states don’t prohibit gender-identity discrimination.

Under federal law, LGBT individuals are not considered a protected class in the private arena. There is pending legislation, known as the Employment Non-Discrimination Act, which proposes to prohibit workplace discrimination against gay and transgender individuals by employers with at least 15 employees. First introduced in 1994, it has recently been criticized for broad religious exemptions.

And in July in Congress, Democrats introduced a bill known as the Equality Act, which would prohibit sexual orientation and gender-identity discrimination in employment, education, housing and public accommodation.

One approach, some lawyers say, might be what’s been called the Utah compromise. Signed into law in March, the legislation amended existing laws to prohibit housing and employment discrimination based on gender identity and sexual orientation. The amendments don’t address public accommodations, and existing law already exempted family-owned businesses with fewer than 15 employees and some religious organizations from Utah civil rights laws.

The legislation was supported by Equality Utah, a nonprofit that focuses on civil rights for LGBT individuals, and the Church of Jesus Christ of Latter-day Saints, which believes that sex outside of married, heterosexual relationships is wrong. Today about 60 percent of Utah’s population is Mormon.

A companion amendment—which Equality Utah did not support—says that county clerks in Utah can avoid performing same-sex marriage services, but counties must have a process where a willing celebrant is available for the service. Same-sex marriage has been legal in Utah since 2014, after the 10th U.S. Circuit Court of Appeals at Denver struck down a state law prohibiting it.

“You could say that we agreed on some things and disagreed on others, but we decided to focus on what we agreed on. It’s very simple, but it’s rarely done,” says Clifford J. Rosky, a member of the board of directors of Equality Utah and a law professor at the University of Utah.

“The differences of the two sides were difficult to bridge, but it was easier to overcome employment and housing because they were narrower, and both already had exemptions.”

In regard to the Utah amendments, the LDS church has said that it supports a “fairness-for-all approach,” with the goal of protecting “key religious rights” and balancing “reasonable safeguards” for LGBT individuals.

“Utah’s solution may not fit exactly with the very specific needs of other states, but the principles of balancing nondiscrimination with religious freedom—the fairness-for-all ap-proach—and the process of working in a collaborative way are worthy of emulation,” says Michael Purdy, director of government relations for the LDS church.

Robin Fretwell Wilson, a law professor at the University of Illinois at Urbana-Champaign, helped the Utah legislature enact the amendments. She says some other states’ recent RFRAs are “one-sided deals” in that they attempted to protect some people’s religious liberties but did nothing to help the LGBT community.

Oklahoma, South Carolina and Texas attempted to amend or supplement existing RFRAs this year, according to the National Conference of State Legislatures. And Arkansas, Indiana and Mississippi passed RFRA legislation between 2014 and 2015.

“One-sided deals stink, and you’re going to get pounded for it,” says Wilson. She urges both sides to bargain and lock in protections while they still can. The Utah amendments, she adds, advance gay rights, but they don’t wash out the organizations’ religious character.

“We had people in Utah who needed something that would say,” for example, that marriage retreats for traditional couples would still be allowed for a church that disagrees with same-sex marriage, she says. “But you also needed to actually give people rights.” Wilson mentions a waiter who was fired after being seen at a gay pride parade. In states that don’t extend employment discrimination protection to LGBT individuals, she adds, the firing would be legal.

“That’s not right,” Wilson says. “Who cares if he went to a gay parade? He’s serving my burger.”

Amy Fowler, an attorney with the Salt Lake Legal Defenders Association, is president of LGBT & Allied Lawyers of Utah. Many people shared personal stories while the legislation was pending, she says, and that was helpful to its passage.

The Utah approach, she adds, could work for other states, too.

“When you put a personal face on a story, either from a religious leader or an LGBT person who experienced discrimination, it makes it more real,” Fowler says. “Many people just want a job and a house. The ability to support yourself and be safe—that resonates with people.”

When Indiana’s RFRA became law in 2015, critics claimed that the law might allow businesses to circumvent local ordinances that prohibited LGBT discrimination. In response, national corporations such as Eli Lilly expressed their displeasure, and some large convention sponsors threatened to pull events out of Indiana.

A week after Indiana Gov. Mike Pence signed the law, it was amended to make it clear that businesses could not invoke the law against state or local anti-discrimination laws, including local ordinances prohibiting LGBT discrimination. That upset religious groups who supported the original proposal. Others were unhappy because LGBT individuals still had no statewide discrimination protections under the Indiana Human Rights Act.

“Before and after RFRA, it’s been the case throughout most of Indiana that LGBT individuals can legally be discriminated against, whether or not a business has a religious objection,” says Daniel O. Conkle. A constitutional law professor at Indiana University in Bloomington, Conkle supports the Indiana RFRA but says he’d also like to see the state add LGBT protections to its human rights act.

“To my mind,” he says, “you have deeply felt and valid concerns on both sides of the equation.”

This article originally appeared in the September 2015 issue of the ABA Journal with this headline: “After Obergefell: States deal with religious and gay rights in the wake of the high court’s same-sex marriage ruling.”