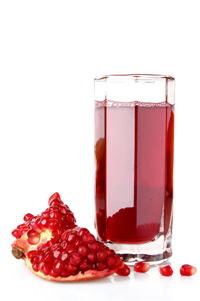 Beleaguered juice maker Pom Wonderful has responded to an adverse ruling by an administrative law judge by plucking positive quotes from his opinion and putting them in new ads.

On Monday, Judge D. Michael Chappell issued a cease-and-desist order barring the company from claiming that its juice reduces the risks of heart disease, prostate cancer and erectile dysfunction. On Thursday, the company launched its new ad campaign, report the New York Times and Forbes magazine.

Chappell had ruled in a deceptive advertising complaint by the Federal Trade Commission. His 355-page ruling (PDF) found the company had provided insufficient evidence to support some of its implied health claims, but it could promote the beverage as healthy.

One ad says the judge found that Pom products “do provide significant health benefits” and supplies this quote from the opinion: “Competent and reliable scientific evidence supports the conclusion that the consumption of pomegranate juice and pomegranate extract supports prostate health, including by prolonging PSA doubling time in men with rising PSA after primary treatment for prostate cancer.”

The next sentence from the opinion isn’t as positive, the Times says. “However, the greater weight of the persuasive expert testimony shows that the evidence relied upon by the respondents is not adequate to substantiate claims that POM products treat, prevent or reduce the risk of prostate cancer or that they are clinically proven to do so,” Chappell wrote.

Kelley Drye partner August Horvath deemed the ad campaign “extremely unusual” in an interview with Forbes. “I consider it ill-advised,” Horvath told Forbes. “The things that Pom has won on, that it is crowing about here—they could still lose on those matters, and a good way to do it is to make the FTC really angry. And that’s what they might be doing.”