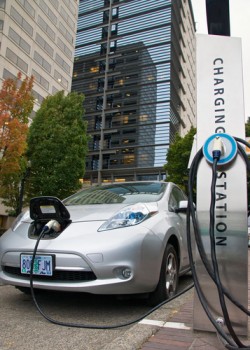 Alex Kozinski, the chief judge of the San Francisco-based 9th U.S. Circuit Court of Appeals, isn’t mincing words in his role as an objector to a proposed settlement in a class action alleging defects in batteries for the Nissan Leaf, an all-electric car.

Kozinski and his wife, Marcy Tiffany, filed a “scathing objection” to the settlement, and Kozinski spoke against the deal in a hearing before a California federal judge Monday, the Daily Journal (sub. req.) reports in stories published Tuesday and Wednesday. Kozinski and Tiffany own a 2011 Nissan Leaf and they aren’t happy with their battery or the plaintiffs’ counsel in the litigation.

The proposed settlement would expand the warranty for Leaf owners, award $5,000 to the two named plaintiffs and pay the lawyers $1.9 million, the Daily Journal reports. The company’s lawyers say the new warranty is an outstanding result. But Kozinski and Tiffany don’t think so.

“The proposed settlement is a sham, benefiting only class counsel, named plaintiffs and Nissan,” the objection said. “Class members are getting absolutely nothing of value, while having their rights abrogated.” On Nov. 5, Kozinski and his wife filed an amendment to “withdraw any suggestion that Plaintiffs’ Counsel acted unethically in the conduct of this litigation.” Yet the couple continued their hard-hitting criticism in a Nov. 10 court document (PDF).

“The motion seeking approval of the settlement makes explicit what could only be inferred before: Plaintiffs’ counsel negotiated a settlement in the case ‘prior to production of any discovery’ by Nissan,” Kozinski and Tiffany wrote.

“That’s right, plaintiffs’ counsel sat down to the negotiating table and cut a deal, without knowing a single thing about what cards their opponents held. For all counsel knew—for all they know even today—there are memoranda and reports in Nissan’s internal files disclosing that the LEAF’s Lithium-Ion battery suffers from a variety of defects, and that Nissan nevertheless decided to go to market with it. If the case settles, these documents may never come to light.”

The objection does acknowledge there was “confirmatory discovery” after the deal was reached, but says it was “plainly inadequate.” By the time plaintiffs’ counsel were reviewing the documents, Kozinski and Tiffany wrote, the lawyers “no longer had an incentive to look for evidence establishing liability; their incentive was to get the settlement finalized so they could cash in their bounty. Finding a smoking gun was the last thing counsel wanted, as it could call into question their judgment in having settled the case without having conducted discovery.”

Kozinski and Tiffany bought their electric car in 2011 and were unable to make the 80 mile trip home before the battery was drained, the Daily Journal says, citing court papers filed by the couple. They had to recharge the Leaf at a dealership 15 miles short of their home, though Nissan had advertised the battery could last 100 miles. Kozinski and Tiffany say the salesperson did warn them about the battery—but not until after they signed the documents to buy the car.