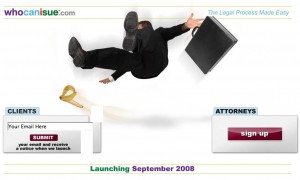 Round the corner at the ABA Expo, and two young women dressed in skintight nurses’ uniforms, doctors’ coats and red high-heeled shoes are there to tell curious lawyers about WhoCanISue.com.

Representatives of the new website, set to launch in September, are among more than 100 exhibitors at the ABA Annual Meeting in New York City who are hawking everything from legal software to briefcases to a law school in Michigan.

But the nurses—who confess they are actually freelance promotional models—are perhaps the most unusual marketing ploy. They say the outfits and even the red shoes were the ideas of the marketers who hired them. Be among the first 500 lawyers to advertise on the site for legal consumers, the nurses say, and your membership fee of $1,000 a year is waived for 2008.

Vincent Celentano, a real estate investor, is the primary financial backer for the venture. He plays a video that portrays the law firm of Dewey, Cheatum & Howe and a toilet stuffed full of money, representing where the Dewey firm’s ad dollars go when its marketing fails to target qualified clients. The video also includes a planned TV ad for the website that features lawyers running after an ambulance. The injured man is later treated by a nurse who advises him he can find a lawyer at WhoCanISue.com.

The website will answer consumers’ legal questions and will generate lawyer ads in legal categories that match the consumers’ curiosity. Celentano says personal injury lawyers aren’t offended by the ambulance-chaser theme. It’s making fun of the system, not the lawyers, he says.

More often, exhibitor marketing consists of demonstrations and free trinkets. The Thomas M. Cooley Law School is back at the Expo with lots of the latter. At the ABA’s annual meeting in Hawaii, the school’s sunblock and flip-flops were a big hit. This year it is giving away tote bags, luggage tags, pens, T-shirts and sunglass cases. You can also pose in a get-up resembling the Statue of Liberty for a souvenir photo that is placed in a kitchen magnet frame.

The Expo runs through 2 p.m. Saturday at the Hilton New York.