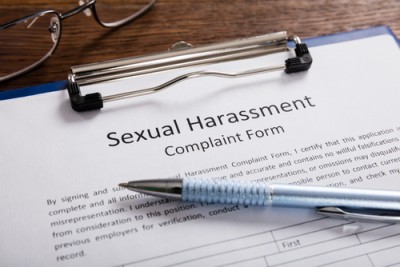 A gay Latino lawyer who once worked for Ogletree Deakins has filed a lawsuit claiming sexual harassment by a male partner.

The allegations follow a suit filed last month by a nonequity partner that claims the firm discriminates against female partners in pay, promotions and opportunities. Ogletree Deakins is a labor and employment law firm. The Recorder and Law360 have coverage of the new suit.

The John Doe plaintiff claims partner Johnnie James talked about three-way sex and pornography, and told him he appeared to be a former “wild boy.” When Doe complained to a partner and other colleagues, James learned about the complaint and stopped giving him work for about nine months, the suit says.

The harassment resumed when James began giving Doe more work, the suit says. James talked about his sex life and showed Doe explicit videos, according to the suit

Doe also claims that James told him he should not get married because it showed he wasn’t serious about his career. Doe got married anyway. Afterward, James warned Doe not to have any children and not to work part-time. Doe finally reported James’ conduct to human resources in July 2017 and said he felt compelled to leave the firm because of his experience.

Doe had joined the firm in July 2015 as a staff attorney, and was later promoted to of counsel for “barely any increase in pay,” the suit says. But he was never promoted to associate or partner.

The suit alleges the firm paid Doe less than associates with comparable experience, even though he did the same work as associates. He was told his hours were too low for a promotion, yet a straight, white associate who missed the billable requirement was recommended for partner consideration, according to the suit.

Human resources had promised to investigate, but it “never completed an impartial or complete invesitigation,” the suit alleges.

After the ABA Journal requested comment from James, Ogletree Deakins responded with a statement. “At no time did the plaintiff complain of alleged sexual harassment to the firm before his resignation,” the statement said. “We promptly and fully investigated these allegations once they were brought to our attention, and subsequently determined them to be false, unsubstantiated or deficient.”

“The salacious nature of these allegations do not make them true and cannot change the facts,” the law firm said.

Ogletree Deakins said Doe was paid less because of a history of underperforming that included “consistently failing to reach his annual billing requirements by wide margins.” He got a $20,000 raise and a classification change when he improved his performance, the firm said.

“We will confidently defend the firm against these baseless claims, as we remain steadfast in our commitment to a safe working environment and equal opportunity for all,” the firm said.

Updated at 10:50 a.m. to include more information from Ogletree’s statement.