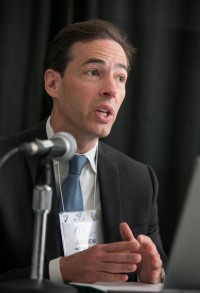 Suffolk University Law School has found a use for some unused space in its law library.

Legal outsourcing company Integreon will create an office there and pay students to work on projects such as due-diligence, e-discovery and document review, contract review and legal spending analytics, according to a story by Bloomberg Big Law Business, a press release and a story on Suffolk’s website. The students will be paid $20 an hour for their work.

Suffolk law dean Andrew Perlman tells Bloomberg the partnership with Integreon is an acknowledgment that traditional law jobs are declining, even as jobs involving law and technology are increasing. The idea is that students who do well will work at other Integreon sites as project managers or in some other administrative position, he said. The students will also be better prepared for jobs with legal technology companies or other positions in which a law degree is a plus, he said.

Integreon isn’t paying rent for the space, but it will transfer part of its revenues to the law school, Perlman said.

“Critics might argue that Suffolk is bringing the fox into the henhouse—training students to speed up the contraction of a legal market they are hoping to enter,” the story on Suffolk’s website says.

The story offers this quote by Perlman in rebuttal: “To ignore legal tech training would be unfair to a generation of students who will compete in a world increasingly driven by innovation and rapid technological change. Our tech-savvy students are already among those shaping the field. We’re finding that our graduates with cross-training in technology stand out in the job market and are able to put those skills to use.”