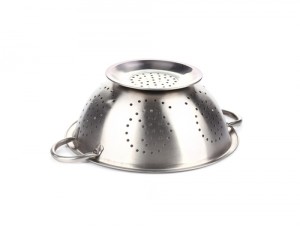 When Lindsay Miller initially tried to get her driver’s license photo taken with a pasta strainer on her head, the Massachusetts Registry of Motor Vehicles balked.

But, following an administrative appeal with the help of civil rights groups, the agency on Thursday permitted the self-proclaimed “Pastafarian” to don the metal colander and do so.

Although hats and head coverings are ordinarily not allowed, medical and religion-based exceptions are made. And Miller, because she is a member of the satirical Church of the Flying Spaghetti Monster, qualifies, the Associated Press, the Boston Globe (sub. req) and CBS Local explain.

“As a member of the Church of the Flying Spaghetti Monster, I feel delighted that my Pastafarianism has been respected by the Massachusetts RMV,” Miller said in an American Humanist Association news release. “While I don’t think the government can involve itself in matters of religion, I do hope this decision encourages my fellow Pastafarian Atheists to come out and express themselves as I have.”

The civil rights group and attorney Patty DeJuneas of the Secular Legal Society helped Miller with the administrative appeal.