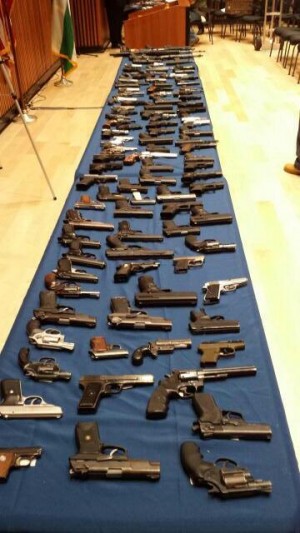 So what tipped them off to the 254 firearms seized and led to 19 arrests?

There were undercover buys and gumshoe investigative work. But police were able to trace alleged conspirators to a source thanks to posts on social media–and particularly Instagram–by rapper Matthew “Neno” Best, according to Yahoo! News and New York Magazine.

New York police were initially clued into the smuggling operation by an unrelated drug bust. But they started piecing together other clues, including photos of the guns posted by Best.

Weapons, which included .22-caliber pistols and seven assault weapons, were alleged to have moved from North and South Carolina to New York City, according to a separate New York Magazine story.

Authorities focused on two suspects: Walter Walker of Sanford, N.C., and Earl Campbell of Rock Hill, S.C. Both are accused of smuggling the guns in their luggage on discount buses headed to New York City’s Chinatown, Yahoo reports.