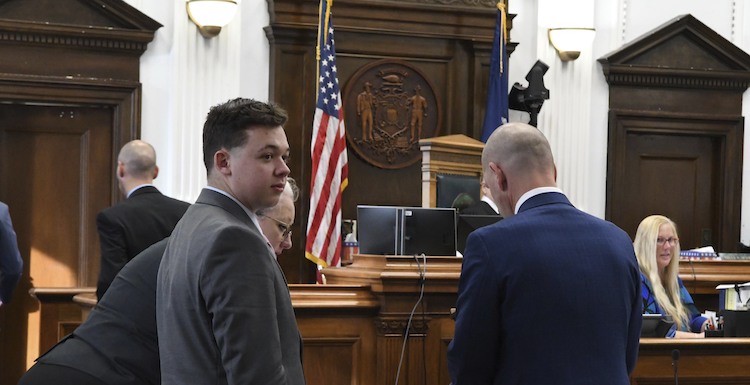 Kyle Rittenhouse looks toward his family during a break in jury selection on the first day of his trial in Kenosha, Wisconsin, circuit court Monday. Photo by Mark Hertzberg/pool photo via the Associated Press.

Prosecutors face a “formidable challenge” in the trial of Kyle Rittenhouse, the teenager accused of shooting three protesters, killing two of them, during racial justice demonstrations last year in Kenosha, Wisconsin, according to Reuters.

Rittenhouse will argue self-defense in fighting the more serious charges, according to Reuters and the Milwaukee Journal Sentinel. He faces several charges, including intentional, reckless and attempted homicide; reckless endangerment; a curfew violation; and possession of a firearm as a minor. Rittenhouse was 17 at the time that he shot the three people with a semi-automatic rifle.

Under Wisconsin law, a person can use deadly force if they reasonably think it is necessary to prevent death or great bodily harm. If a defendant charged with first-degree homicide in Wisconsin has an unreasonable belief that they had to use deadly force, the charge can be mitigated to second-degree intentional homicide, according to another story by the Milwaukee Journal Sentinel.

There is no duty to retreat, but the self-defense law says an opportunity to retreat is a factor in determining whether deadly force was reasonable.

Reuters reports that one of the men killed by Rittenhouse, 36-year-old Joseph Rosenbaum, apparently tried to grab the barrel of Rittenhouse’s rifle, according to a witness who spoke with police. The shooting apparently spurred others to chase Rittenhouse, causing him to fall.

Protester Anthony Huber, 26, was swinging a skateboard at Rittenhouse when he was fatally shot, video evidence suggests. The third protester, Gaige Grosskreutz, 27, was holding a pistol. He put his arms in the air and then started moving toward Rittenhouse, according to video evidence cited by Reuters. Rittenhouse shot and wounded him in the arm.

The Milwaukee Journal Sentinel, however, said there is a wrinkle in Rittenhouse’s self-defense argument. The defense is not available to those involved in illegal conduct likely to provoke an attack, unless they are in imminent danger of death or great bodily harm. Even then, they must show that they thought that they had exhausted all reasonable means of escape before using deadly force, the newspaper said.

Prosecutors can use the gun charge to claim that Rittenhouse was engaged in illegal activity when he was confronted by protesters, according to the Milwaukee Journal Sentinel. 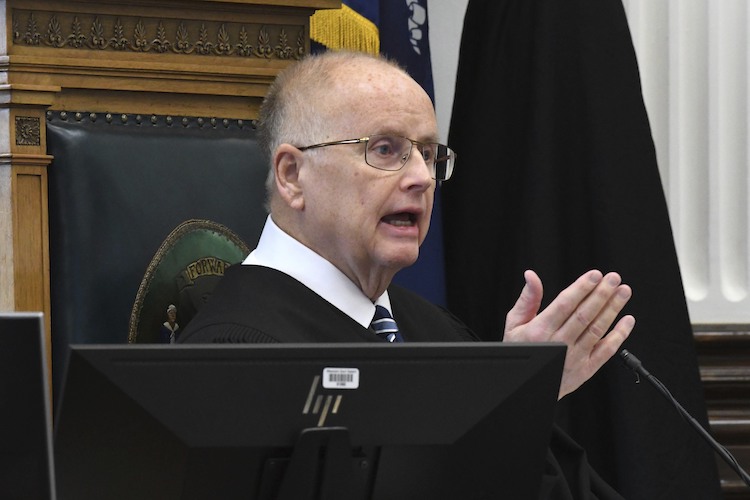 Judge Bruce Schroeder addresses the jury pool at the start of jury selection on the first day of trial for Kyle Rittenhouse in Kenosha, Wisconsin, circuit court Monday. Photo by Mark Hertzberg/pool photo via the Associated Press.

Jury selection got underway Monday. Judge Bruce Schroeder, 75, is presiding in the trial.

Schroeder ruled last week that the men who were shot could not be described as “victims” or even use the phrase “alleged victim” at trial because he has a long-held opinion that “victim” is a loaded word, NBC News reported.

The men who were shot could be called “rioters,” “looters” or “arsonists,” however, if evidence showed that they were engaged in those activities, Schroeder said.

Schroeder is a former prosecutor and is Wisconsin’s longest-serving circuit judge, the Chicago Tribune reports. According to the article, the judge “presides over cases with hard-line positions and chatty asides.”

The Rittenhouse case “will be undoubtedly the biggest in Schroeder’s career, but he is not new to the public stage or controversy,” the Chicago Tribune said. “A circuit judge since 1983, he has made headlines for decades as he pushed for more flexibility on state-mandated child support rules, imposed a sentence intended to shame a defendant, and became among the first judges in the United States to require sex workers to take AIDS tests.”

The shaming sentence, overturned on appeal, required a shoplifting defendant to inform management of her offense any time that she entered a store while on supervision for the crime.

Defendants in Wisconsin have a one-time option to switch judges, and so many used the option to avoid Schroeder that it created a workload imbalance during one period at the Kenosha courthouse. A defense lawyer told the Chicago Tribune that the likely reason is because Schroeder is a “stiff sentencer.”