Roberts, Kavanaugh join with liberal justices to rule for woman shot by police while fleeing 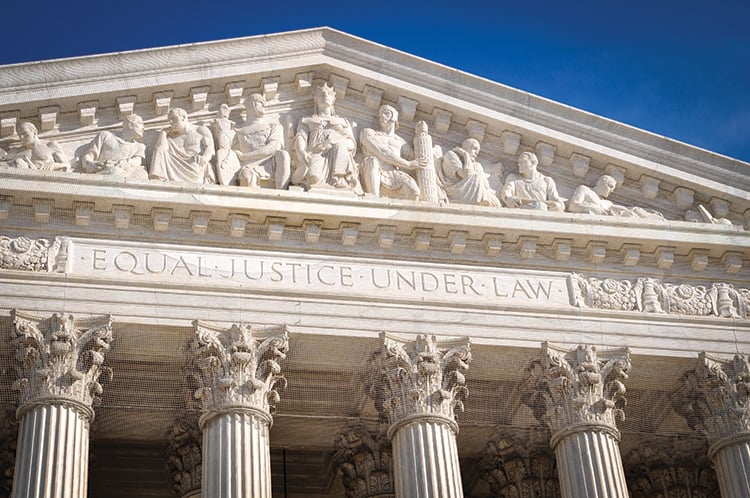 A woman who continued to flee after being shot by police has the same Fourth Amendment rights against unreasonable seizure as a person who is detained, the U.S. Supreme Court ruled Thursday.

The high court ruled 5-3 for Roxanne Torres, who said she thought the officers who tried to open the door of her car were carjackers. The New Mexico State Police officers were wearing tactical vests marked with police identification, but Torres said she only noticed their guns.

The issue in the case was whether a seizure happens for Fourth Amendment purposes when an officer shoots someone who temporarily evades capture after a shooting.

“The answer is yes,” Chief Justice John G. Roberts Jr. wrote in the March 25 majority opinion. “The application of physical force to the body of a person with intent to restrain is a seizure, even if the force does not succeed in subduing the person.”

The incident happened in July 2014 outside an apartment complex in Albuquerque, New Mexico, where police had gone to execute a warrant. Torres, who was experiencing methamphetamine withdrawal, drove away after the officers approached her car.

Police fired 13 shots, striking her twice in the back. Torres drove to a nearby apartment complex, where she stole an idling Kia Soul. She then drove 75 miles to another town, where she was hospitalized. Torres was airlifted back to an Albuquerque hospital, where she was arrested.

Torres sought damages for an unreasonable seizure under Section 1983 of the Civil Rights Act. A district court judge tossed her excessive force claim, reasoning that there was no seizure because she continued to flee after being shot.

In his opinion, Roberts stressed that the majority decision is narrow and does not apply to every physical contact between a government employee and a member of the public.

“A seizure requires the use of force with intent to restrain. Accidental force will not qualify,” Roberts wrote. “Nor will force intentionally applied for some other purpose satisfy this rule. In this opinion, we consider only force used to apprehend. We do not accept the dissent’s invitation to opine on matters not presented here—pepper spray, flash-bang grenades, lasers and more.”

Roberts said the court’s decision for Torres left open several issues to be decided on remand, including whether the seizure was reasonable and whether the officers had qualified immunity.

In a dissent, Justice Neil M. Gorsuch said the majority had disregarded the Constitution’s original and ordinary meaning, had dispensed with interpretive rules, and had bypassed “the main currents of the common law.”

Gorsuch said the majority decision may have been based on an impulse that people such as Torres should be able to sue for damages.

“Sometimes police shootings are justified, but other times they cry out for a remedy. The majority seems to give voice to this sentiment,” Gorsuch said.

“But tasked only with applying the Constitution’s terms, we have no authority to posit penumbras of ‘privacy’ and ‘personal security’ and devise whatever rules we think might best serve the [Fourth] Amendment’s ‘essence.’”

Gorsuch’s dissent was joined by Justices Clarence Thomas and Samuel A. Alito Jr.