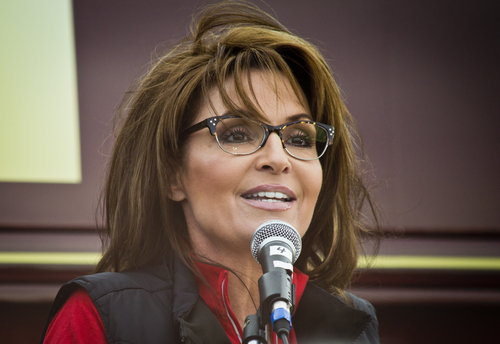 Former vice presidential candidate Sarah Palin claims in a suit filed on Tuesday that the New York Times defamed her in an editorial that linked her to a 2011 mass shooting that claimed the life of a federal judge and five others.

The suit (PDF) claimed the Times “falsely stated as a matter of fact” that Palin had incited the January 2011 attack, and then used that false assertion “as an artifice to exploit” the June 14 shooting of Republican lawmakers at a baseball practice. The Washington Post, the Post’s Eric Wemple Blog, the New York Times and the Wall Street Journal (sub. req.) have stories.

The Times editorial, which was later corrected, said that Palin’s political action committee had circulated a map of targeted electoral districts before the 2011 shooting that placed 20 Democrats, including U.S. Rep. Gabby Giffords, under stylized crosshairs. Giffords was wounded in the 2011 attack. “The link to political incitement was clear,” the original version of the editorial stated.

The Times later issued a correction saying the crosshairs were placed over targeted electoral districts, not the politicians, and there was no established link between political rhetoric and the shooting six years ago.

The Times editorial was published on June 14, the same day that a gunman opposed to President Donald Trump opened fire at a congressional baseball practice. The Times said the more recent attack was probably evidence of how vicious American politics has become, and was “indisputably” evidence of how easy it is to access guns.

Palin’s suit claims the Times had previously published articles acknowledging no connection between Palin and the 2011 shooting. The complaint also takes the Times to task for issuing a correction that fails to use Palin’s name. The entire editorial should have been retracted, and Palin should have gotten an apology, the suit says.

A spokesperson for the Times said the newspaper would “defend against any claim vigorously.”

The Eric Wemple Blog says Palin’s legal argument is convincing, though two experts contacted by the blog believed the editorial would be protected.

University of Florida professor Clay Calvert told the blog that any statement of incitement “was used in a loose, figurative and rhetorical sense rather than a literal, legal one.” The fact that the statement appeared in an editorial “adds to the idea that reasonable readers of the New York Times, also knowing its usually liberal political editorial viewpoint, would treat this as protected opinion.”

Gibson, Dunn & Crutcher partner Theodore Boutrous predicted the lawsuit “will get publicity for Ms. Palin, but nothing else.”

“The Times opinion piece is plainly opinion,” Boutrous told the blog. “They quickly corrected it in response to reactions once it was published, and the First Amendment provides breathing space and protection for such statements absent clear and convincing evidence of actual malice.”