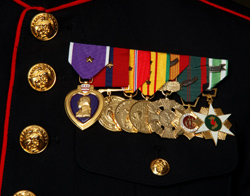 The U.S. Supreme Court has struck down a law that makes it a crime to lie about earning military medals.

Six justices agreed that the law violates the First Amendment. A concurrence by two of those justices, however, gives Congress a chance to redraft the statute to avoid the constitutional problem, SCOTUSblog reports. Justice Anthony M. Kennedy wrote the plurality opinion (PDF) striking down the law.

The Stolen Valor Act makes it a crime for a person to falsely claim to have received a military medal. A water district official from Pomona, Calif., was accused of violating the law when he asserted at a public meeting that he was a retired Marine who had received the Medal of Honor.

“Lying was his habit,” Kennedy wrote at the beginning of his plurality opinion. “Xavier Alvarez, the respondent here, lied when he said that he played hockey for the Detroit Red Wings and that he once married a starlet from Mexico. But when he lied in announcing he held the Congressional Medal of Honor, respondent ventured onto new ground; for that lie violates a federal criminal statute, the Stolen Valor Act of 2005.”

Alvarez pleaded guilty while reserving the right to challenge the law. His conviction must be overturned, Kennedy said in a plurality opinion joined by Chief Justice John G. Roberts Jr. and Justices Ruth Bader Ginsburg and Sonia Sotomayor.

Kennedy said content-based restrictions on speech required exacting scrutiny, and the statute can’t survive under that standard. “Permitting the government to decree this speech to be a criminal offense, whether shouted from the rooftops or made in a barely audible whisper, would endorse government authority to compile a list of subjects about which false statements are punishable,” Kennedy wrote.

“Were this law to be sustained, there could be an endless list of subjects the national government or the states could single out. Where false claims are made to effect a fraud or secure moneys or other valuable considerations, say offers of employment, it is well established that the government may restrict speech without affronting the First Amendment. … But the Stolen Valor Act is not so limited in its reach.”

Justice Stephen G. Breyer concurred in the judgment in an opinion joined by Justice Elena Kagan. He said the statute violates the First Amendment, but the government might be able to achieve its objectives “in less burdensome ways” with a “more finely tailored statute.” Congress could determine that some military medals deserve more protections than others, he said, or it might punish military medal lies that cause on specific or material harm.