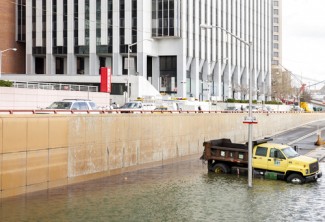 The U.S. government has continued to allow fossil fuels that foster climate change, violating the constitutional rights of future generations, according to a lawsuit filed last week.

The lawsuit was filed in federal court in Eugene, Oregon, by the California plaintiffs firm Cotchett Pitre & McCarthy and lawyers from Our Children’s Trust, the National Law Journal (sub. req.) reports. The suit claims failure to eliminate fossil fuel emissions violates the right of people in the future to life, liberty and property under the Fifth Amendment and other unenumerated rights under the Ninth Amendment.

“There is an extremely limited amount of time to preserve a habitable climate system for our country; otherwise, the warming of our nation will become locked in or rendered increasingly severe,” the suit says.

Plaintiffs in the suit are 21 children and teens, a nonprofit environmental group called Earth Guardians, and a climate scientist who serves as guardian for “future generations.” Defendants include the U.S. government and President Barack Obama.

Our Children’s Trust has a summary of the suit here (PDF) and a copy of the lawsuit here (PDF). Above the Law links to additional coverage by MSNBC.