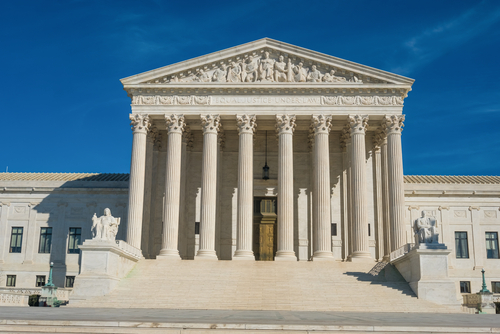 The U.S. Supreme Court on Monday allowed President Donald Trump’s latest travel ban take effect, including a ban on travel by those with a bona fide relationship to a person or entity in the United States.

Politico and the Washington Post have stories. The orders, here and here, were issued in appeals from orders by federal judges in Hawaii and Maryland.

Justices Ruth Bader Ginsburg and Sonia Sotomayor said they would have denied the government request.

The orders allowing the travel ban to take effect will remain in place while the government’s appeal is heard in two appeals courts and, if cert is granted, until the Supreme Court rules. “In light of its decision to consider the case on an expedited basis,” the Supreme Court said in both orders, “we expect that the Court of Appeals will render its decision with appropriate dispatch.”

The eight countries on the list are Iran, Libya, Somalia, Syria, Yemen, Chad, North Korea and Venezuela, although the travel ban for the South American country only applies to some government officials and their families. The travel restrictions vary based on the country.

The Hawaii judge, Derrick Watson, had ruled the latest ban “plainly discriminates based on nationality” and issued a nationwide order blocking the restrictions on travel from six majority-Muslim countries. The San Francisco-based 9th U.S. Circuit Court of Appeals had partly overturned Watson’s order, allowing the travel ban to take effect against those who do not have bona fide relationships to persons and entities in the the United States.

The Maryland judge, Theodore Chuang, had allowed the travel ban to take effect, with the bona fide relationship exception.

The “bona fide relationship” exception was based on a June 26 decision by the U.S. Supreme Court that partly lifted an injunction preventing the previous travel ban from taking effect. The Supreme Court said then that the government couldn’t enfore its travel ban against those with “a credible claim of a bona fide relationship” with a person or entity in the United States, but it could use the ban to keep people out of the country who lack such relationships.

Omar Jadwat, director of the ACLU’s Immigrants’ Rights Project, commented in a statement.

“It’s unfortunate that the full ban can move forward for now, but this order does not address the merits of our claims,” Jadwat said. “We continue to stand for freedom, equality, and for those who are unfairly being separated from their loved ones. We will be arguing Friday in the 4th Circuit that the ban should ultimately be struck down.”