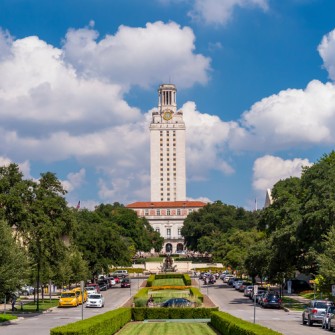 The University of Texas at Austin.

The U.S. Supreme Court has upheld a race-conscious admissions program at the University of Texas at Austin, while warning of the need for further evaluation as the school collects more data on its effects.

The court ruled for the university on Thursday in a 4-3 decision (PDF) finding no equal protection violation. Justice Elena Kagan did not participate in the decision.

The court ruled in a suit by Abigail Fisher, a white student who was denied admission to the university in 2008. While rejecting Fisher’s arguments, the court nonetheless said the university needs to continue to scrutinize the fairness of its admissions program and whether changing demographics makes the race-conscious policy unnecessary.

The University of Texas at Austin accepts the top students at each of the state’s high schools under a so-called Top Ten Percent Plan. Because admissions in this category are capped at 75 percent, students actually have to finish in the top 7 percent or 8 percent of their class to be accepted. The rest of the students are chosen in a way that considers race as one factor.

For those 25 percent, the university considers an “academic index” of SAT score and academic performance, and a “personal achievement score.” The personal achievement review considers essays, supplemental information from the applicant such as recommendation letters, and potential contributions to the university’s student body. The potential contributions include leadership experience, extracurricular activities, awards and honors, and other “special circumstances.” Race is just one of the special circumstances.

in this personal achievement calculation, race “is but a ‘factor of a factor of a factor’ in the holistic-review calculus,” Kennedy wrote, citing the lower court opinion. “Consideration of race is contextual and does not operate as a mechanical plus factor for underrepresented minorities,” Kennedy said.

Fisher was not eligible for admission under the Top Ten Percent Plan and had not challenged that aspect of the program. As a result, Kennedy said, the record is “almost devoid of information” about students who won admission through the plan. The university has a continuing obligation to satisfy its strict scrutiny burden with evaluation of the program as additional data is collected, Kennedy said.

“As the university examines this data,” Kennedy said, “it should remain mindful that diversity takes many forms. Formalistic racial classifications may sometimes fail to capture diver­sity in all of its dimensions and, when used in a divisive manner, could undermine the educational benefits the university values. Through regular evaluation of data and consideration of student experience, the university must tailor its approach in light of changing circumstances, ensuring that race plays no greater role than is necessary to meet its compelling interest.”

The Supreme Court had previously considered Fisher’s case in 2013, ruling 7-1 that a federal appeals court had applied an overly deferential standard in assessing the admissions program. The court said then that the university has to prove its program to attain diversity is narrowly tailored to meet that goal. The New Orleans-based 5th U.S. Circuit Court of Appeals found the university had met the burden, and the case returned to the U.S. Supreme Court.

Justice Samuel A. Alito Jr. dissented in an opinion joined by Chief Justice John G. Roberts Jr. and Justice Clarence Thomas. Alito argued that the university had failed to prove its program had satisfied the test established in the first Fisher decision.

“Something strange has happened since our prior decision in this case,” Alito wrote. “The university has still not identified with any degree of specificity the interests that its use of race and ethnicity is supposed to serve.”

The majority opinion concluding that the university had met its burden “is remarkable—and remarkably wrong,” Alito wrote.

Thomas wrote a separate dissent expressing the opinion that the use of race in university admissions is categorically prohibited by the equal protection clause.

The case is Fisher v. University of Texas at Austin.

ABA President Paulette Brown said in a statement that the ABA welcomes the decision upholding the affirmative action program. “Undergraduate admissions policies like UT-Austin’s are critical for increasing the number of students of color in the pipeline to law schools and the legal profession, and are essential for ensuring that legal and other educational institutions fully reflect and represent all members of society,” Brown said. “The association submitted an amicus brief to emphasize the vital role that admissions policies like this play in breaking down implicit racial biases and stereotypes.

“Justice Kennedy’s opinion underscores the ‘enduring challenge’ to our nation’s education system to address diversity and maintain the ‘constitutional promise of equal treatment and dignity.’ Despite considerable progress in terms of diversity and inclusion, admissions policies that consider race as one factor among many remain crucial for the advancement of racial and ethnic diversity at colleges and universities and other similar institutions.”

ABAJournal.com: “Chemerinsky: 2 Texas cases before SCOTUS could have big implications for race in the US