The ABA Techshow’s highly anticipated, and somewhat controversial keynote session took place on Friday afternoon at the Hilton Chicago. As promised, Avvo CEO Mark Britton, LegalZoom CEO John Suh and Rocket Lawyer CEO Charley Moore took part in a panel discussion that focused on their careers, their thoughts on the regulatory landscape, and their visions about the future of the legal industry. 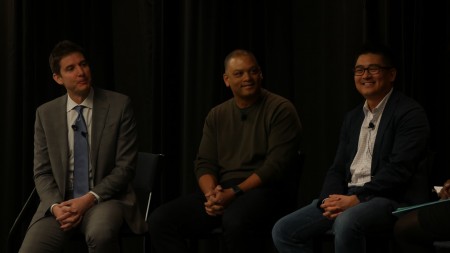 In a panel moderated by Judy Perry Martinez, former chair of the American Bar Association’s Commission on the Future of Legal Services, and Paula Frederick, general counsel for the State Bar of Georgia, the trio underscored their commitment to bridging the gap in access to justice while reiterating their common, customer-oriented philosophy.

“It all starts with the consumer,” Britton said. “There are large numbers of people who just aren’t using lawyers.” Suh noted that LegalZoom’s primary commitment is to middle-class families and small-business owners—groups that have seen radically diminished access to justice over the last 30-40 years.

Moore agreed, stating: “Most of people who hire a lawyer through Rocket Lawyer have never hired a lawyer before.”

While all three CEOs have frequently faced questions about regulations governing the unauthorized practice of law, the trio did not use the Techshow stage to rage about the issue, or about regulations in general. Moore instead argued that regulations are a good thing and perform a valuable service for the public—a notion that Britton mostly agreed with. The Avvo CEO, while praising the role of legal ethics in maintaining high standards and “taking care of customers in a way so that they continue to look at the legal industry as exalted,” warned that the threat of regulation can have a chilling effect on lawyers. Additionally, he argued that customers aren’t as concerned about regulations and are really just worried about their own problems.

Suh agreed with Britton that the customer’s needs come first and posited that regulations often get in the way of finding truly innovative ways to solve their problems. “What has really hamstrung a lot of lawyers is the regulatory structure around the law,” Suh said. “In some ways, lawyers hamper their own ability to be creative and create solutions.”

Looking ahead, Moore said he anticipates that local ethics rules will become less important, thanks to the rise in global and transnational business.

Suh, meanwhile, brought up the prospect of robot lawyers and asserted that lawyers should be focusing on other matters.

“Terminators will never replace lawyers, but that’s a weird fear that people have,” he said. “Instead, you should be looking at how you can utilize technology to have a solution that scales. Technology has got to work for customer first, and it has to work for every member of the supply chain.”

The three also reflected on how far they’ve come and noted that they no longer face as much resistance from lawyers as they did a few years ago. “I think we’re long over that hump,” Britton said, pointing out that Avvo is about to hit its 10th anniversary, while Rocket Lawyer has been around for eight years and LegalZoom for 16. “We drive billions, literally billions, of dollars a year for lawyers. Half of solos and small firms are on the Avvo platform, so I’d say go talk to the other half.”

Moore agreed and said he takes pride in the number of lawyers using Rocket Lawyer’s forms in their everyday practice.

Suh, meanwhile, pointed out that solos and small firms shouldn’t be worried about legal service providers. “There are deep structural problems with being a solo practitioner that have very little to do with alternative legal providers,” he said. “There’s been a real decline in solo practice income, the bulk of which happened in the ’80s and ’90s, so you can’t blame that on the internet.” 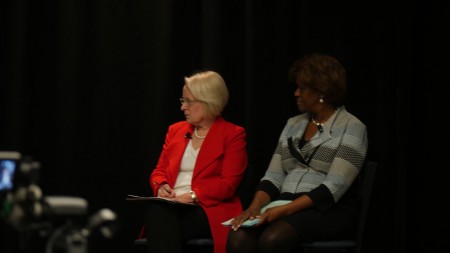 That may be true, but the reception the three executives received was considerably less warm than the raucous ovation that greeted last year’s keynote speaker, Cindy Cohn of the Electronic Frontier Foundation. Then again, she was speaking about her experiences relating to a hot-button political topic that had many in the audience concerned. In that vein, the loudest cheers the three men received came during the Q&A session, when all reiterated their commitment to access to justice and promised to do what they could to protest President Donald Trump’s proposed budget eliminating funding for the Legal Services Corp. “If you can’t afford a lawyer, then you don’t live in a democracy,” Moore said.