The robot lawyers are coming (to help, not to take your jobs) 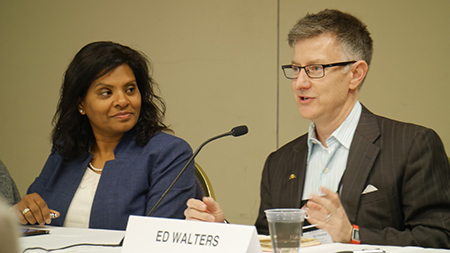 There is no such thing as robot lawyers, and even if there were, they are not coming to take jobs away from human lawyers.

Instead, lawyers should think about how best to work with and harness the potential of software and artificial intelligence to propel their practices forward while bridging the access-to-justice gap.

Those were the main takeaways in a wide-ranging Friday morning panel discussion at ABA Techshow featuring Ross Intelligence CEO Andrew Arruda, IBM ‎Global Chief Information Security Officer Shamla Naidoo and FastCase CEO Ed Walters. The three gave a brief history and overview of artificial intelligence, while dispelling some myths and cautioning those in attendance to temper their expectations as to what AI can and can’t do.

For one thing, the technology isn’t exactly new. “This is tech that’s been around for 60 to 80 years,” Arruda said. “Much of what had been previously theorized is now being done.” In fact, he pointed out that artificial intelligence is already used in finance and health. When it comes to law, AI is still in the early stages, but it’s been utilized for legal research, contract review, e-discovery and due diligence.

That being said, don’t expect artificial intelligence to ever replace human lawyers. “The burning question on everyone’s mind is ‘When is this robot lawyer going to replace me?’” Naidoo said, maintaining that computers will never be able to replicate empathy or utilize psychology—important qualities lawyers must have. “The way we think about it at IBM is that this is an ecosystem of man and machine working together to augment human intelligence. The purpose is to extend human capabilities, not replace humans.”

Instead, Naidoo argued that the more pressing need is for greater transparency. “People should see it and be able to talk about it,” she said. “Mistrust is detrimental to our profession.”

In fact, artificial intelligence has almost become overhyped, a point Walters talked about. In previous decades, artificial intelligence has wilted under the weight of overinflated expectations, becoming something of a joke in academic circles for many years. Walters didn’t think that would happen this time, noting that AI is likely here to stay as a result of more processing power than ever, as is the astronomical amounts of data being produced on a daily basis.

Instead, Walters said that lawyers should focus on what software does well right now while keeping in mind its potential for growth. He noted that there have already been major advances in semantic searches, data analysis, pattern recognition and expert systems, with natural learning in the beginning stages. “We need AI. We need great software,” said Walters, a day after President Donald Trump submitted his budget proposal, which would eliminate funding for the Legal Services Corporation. “It may be only thing to help close the access-to-justice gap.”

In the meantime, the panelists noted that forward-thinking lawyers can take advantage of the burgeoning field. For one thing, as self-driving cars become more common, lawyers will be necessary to help guide clients, companies and even governments through uncharted legal waters. Naidoo and Walters pointed out that Michigan just became the first state to enact a law regulating self-driving cars and predicted that others would follow suit in the coming years.

Naidoo also said that lawyers can use artificial intelligence to improve their business models and empower themselves through better and more timely information.

“We can rebuild our profession,” Arruda quipped, riffing on The Six Million Dollar Man. “We have the technology.”