Justice Thomas: Leaked draft opinion on abortion is 'like kind of an infidelity' 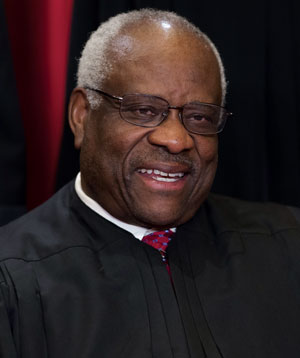 Justice Clarence Thomas said Friday that the leaked draft opinion on abortion has destroyed trust among the justices and is “like kind of an infidelity.”

Thomas, 73, spoke during a Dallas conference sponsored by the American Enterprise Institute, the Manhattan Institute and the Hoover Institution, all conservative groups. He was questioned by his former law clerk, University of California at Berkeley law professor John Yoo.

Thomas has long opposed Roe v. Wade and is thought to be among the conservative majority in Justice Samuel Alito’s draft opinion overturning the decision.

The New York Times, the Washington Post, CNN, the Associated Press and Law.com are among the publications with stories on Thomas’ remarks. How Appealing links to additional coverage, while South Texas College of Law at Houston professor Josh Blackman has commentary and excerpts at the Volokh Conspiracy. Blackman transcribed parts of the remarks here.

Thomas said that a loss of trust changes an institution fundamentally and you “begin to look over your shoulder.” Trust “is gone forever” and it’s “like kind of an infidelity.”

Thomas said the court has changed since it included World War II veterans and he expressed fear about the undermining of institutions. “Who was it, Ben Franklin, that said, ‘We gave you a republic if you can keep it.’ And I think that you have a court and I hope you can keep it,” he said.

Thomas was referring to an 11-year period on the court before the arrival of Chief Justice John Roberts, the New York Times explains.

He also said that conservatives “never trashed a Supreme Court nominee.” Although Merrick Garland, now the attorney general, didn’t get a nomination hearing, “he was not trashed,” Thomas said.

Here are some of Thomas’ extended comments, as transcribed by Blackman:

• In response to a question asking for comment on leaks and protests:

“You can’t have a civil society, a free society, without a stable legal system. And I’ve been in this business long enough to know just how fragile it is. And the institution that I’m a part of, if someone said that one line of one opinion would be leaked by anyone, and you would say that, ‘Oh, that’s impossible. No one would ever do that.’ There was such a belief in the rule of law, belief in the court, a belief in what we were doing, that that was verboten. It was beyond anyone’s understanding, or at least anyone’s imagination, that someone would do that. And look where we are, where now that trust or that belief is gone forever. When you lose that trust, especially in the institution that I’m in, it changes the institution fundamentally. You begin to look over your shoulder. It’s like kind of an infidelity that you can explain it but you can’t undo it. And I think you’re seeing it go through any number of our institutions, whether it’s in the political branches, or whether it’s in the universities. When I went to a university to college, it was the fun place where you were not that well informed, but boy you debated all night.”

• As the discussion continued on suppression of opinion on campuses:

“It’s pretty much acceptable at all the universities and if they, if we’re there with these institutions, how do we recover? So yeah, I do think that what happened at the court is tremendously bad. I think it’s, I wonder, uh, how long we’re going to have these institutions at the rate we’re undermining them. And then I wonder when they’re gone, or they are destabilized, what we will have as a country. And I don’t think that the prospects are good, if we continue to lose them.”

• In response to a question by an audience member about friendships on the court and how to foster those kinds of relationships elsewhere:

“Well, I’m just worried about keeping it at the court now. This is not the court of that era. I sat with Ruth Ginsburg for almost 30 years. And she was actually an easy colleague for me. You knew where she was and she was a nice person to deal with. Sandra Day O’Connor you can say the same thing, David Souter, I can go on down the list. Nino was, he could be agitated but then he forgot he was agitated. … The court that was together 11 years was a fabulous court. It was one you look forward to being a part of. What you, I go back to the point I made about the institutions. What you’ve got to be concerned about is just like you see the law clerks. Remember the last four appointees of the courts, including the newest one I knew as law clerks. These law clerks with these attitudes—”

At that point, Yoo interrupted. Blackman believes Thomas was about to say something about the attitudes of Justices Neil Gorsuch, Brett Kavanaugh and Amy Coney Barrett and incoming Justice Ketanji Brown Jackson.

• Thomas continued on after being interrupted while making a point about law clerks. Blackman believes Thomas thought better of the point he was making and changed direction:

“I just think that they bring, that anybody who would, for example, have an attitude to leak documents, that general attitude is your future on the bench. And you need to be concerned about that. And we never had that before. We actually trusted—it was, we may have been a dysfunctional family. But we were a family. And we loved it. I mean, you trusted each other. You laughed together. You went to lunch together every day. And I can only hope you can keep it. So who was it, Ben Franklin, that said, ‘We gave you a republic if you can keep it.’ And I think that you have a court and I hope you can keep it.”

• In response to a question about what has changed between the prior court and the new one:

“I think what’s changed in society, modernity or post modernity. I think attitudes have changed. I think when I got to the court you still had World War II veterans on the court. You still had people like John Stephens who was a nice man. You had Byron White, who was a Rhodes Scholar when Rhodes Scholars were real athletes and number one in their class, NFL football player, Navy veteran. And you had Sandra Day O’Connor. That’s a different generation and we were living off the sort of the treasures of that generation. That generation has gone. I’m the only member of the court ever to have been born in 1940s. Okay, everybody else is subsequent to that now. And … when I got to the court they were born in the 1930s and the 1920s. And we’re now dealing with post-World War II generation. And as you see it play out in society, I think you’re going to see it play out in the institution. So what’s the difference? It’s a different set of people who grew up in a different era. And I don’t know where that’s gonna lead you, but we know it’s different.”

Yoo has also had his share of controversy. He is known for his controversial legal memos while at the U.S. Justice Department that said the president has the authority to order harsh interrogations of terrorism suspects.