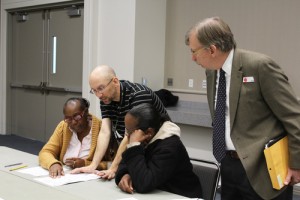 The Michigan Supreme Court on Friday evening declined to hear an appeal by Green Party candidate Jill Stein that sought to restart the presidential recount process.

The court declined the appeal in a 3-2 order (PDF) issued after two justices on Donald Trump’s Supreme Court shortlist recused themselves, report MLive.com, the Detroit Free Press and the Detroit News. How Appealing notes the development.

Chief Justice Robert Young and Justice Joan Larsen had recused themselves because they are on President-elect Donald Trump’s shortlist of possible U.S. Supreme Court appointees. Both said no one no representing Trump ever contacted them or asked if they are interested in serving on the U.S. Supreme Court.

The refusal to hear the case leaves in place a state appeals court decision finding that Stein didn’t satisfy the definition of an aggrieved candidate entitled to request a recount. The state appeals court had ruled that a candidate has aggrieved status only if he or she could state in good faith that, but for mistake or fraud, the candidate would have a reasonable chance of winning an election.

A federal judge had cited the state appellate decision when he ordered a stop to the recount Dec. 7, which dissolved his earlier order to begin the recount without delay.

During a rally in Detroit on Saturday. Stein acknowledged the recount battle was over in Michigan. “We may be moving out of the court of law, but we’re moving into the court of public opinion,” she said.