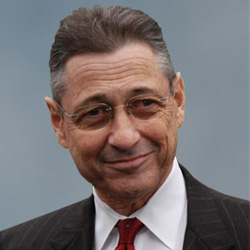 Photo of Sheldon Silver from the New York State Assembly

Was Sheldon Silver “on the take,” as a prosecutor contended? Or a champion of the little guy who interwove his role as a New York legislative leader and a private attorney in an entirely legal manner?

Those were the competing stories presented to a jury in Manhattan on Tuesday as opening arguments were made in the criminal trial of former New York Assembly Speaker Sheldon Silver on federal corruption charges.

Publicly revealing its strategy for the first time, the defense portrayed Silver, 71, who remains a Democratic member of the Assembly, as a “citizen legislator.” He promoted laws to benefit the public, said attorney Steve Molo, while at the same time legitimately earning fees as an attorney for sending business to law firms, reports Newsday (sub. req.).

While there are inevitable conflicts of interest in maintaining such dual roles, and the feds don’t like this system of government, “it is the system New York has adopted, and it is not a crime,” Molo told the jury, insisting “Mr. Silver did not sell his office.”

Prosecutor Carrie Cohen pointed not only to hefty legal fees Silver allegedly earned for misusing his influence as a top lawmaker but Silver’s role in helping to close down a state investigation by the Moreland Commission of lawmakers’ outside income. The lawmaker also failed to disclose all of his income as required, she said.

However, others including the state’s governor also agreed to shut down the probe, Molo said, and prominent lawyers agreed with Silver that the commission’s investigation exceeded its constitutional authority.

The New York Daily News, the New York Post, the New York Times (reg. req) and USA Today also have stories about the trial, which is expected to last at least six weeks.