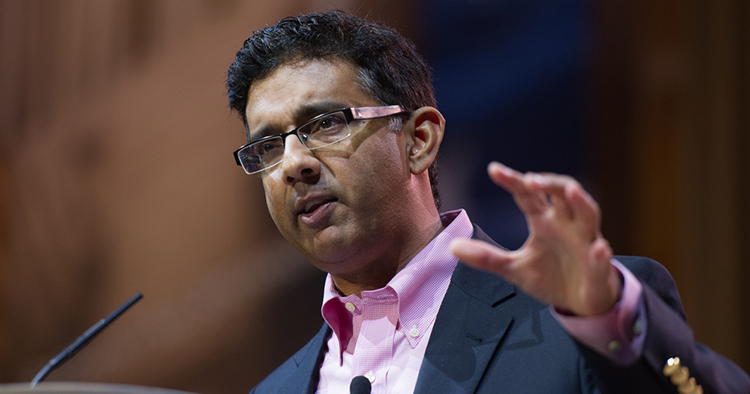 Trump said that D’Souza “was treated very unfairly by our government!” report Politico, the Washington Post and the New York Times.

The White House later announced that Trump pardoned D’Souza because he was “in the president’s opinion, a victim of selective prosecution for violations of campaign finance laws.”

Trump told reporters he is also considering a pardon for TV personality Martha Stewart and a commutation for former Illinois Gov. Rod Blagojevech, a Democrat. Stewart was convicted in 2004 for obstructing justice and lying to investigators about a stock sale. Blagojevich was convicted for political corruption and is serving a 14-year sentence. He was a contestant on the Trump show Celebrity Apprentice.

According to the New York Times, the cases against D’Souza, Stewart and Blagojevich were all tied to prosecutors “who have become nemeses of the president.” Fired FBI director James Comey had prosecuted Stewart.

D’Souza and his supporters had claimed he was targeted because he was a critic of former President Barack Obama. They seized on a recent New York Post report that alleged Rosie O’Donnell had made donations surpassing the legal limit to at least five Democratic candidates. O’Donnell told the newspaper she had assumed that the candidates she supported would return any money above the legal limit.

“I notice the leftist weasels who call me ‘felon’ have gone dead silent about Rosie committing 5—yes five—campaign finance violations,” D’Souza had tweeted.

D’Souza had been sentenced to five years’ probation and overnight stays in a halfway house for eight months.

According to Politico, Trump’s pardons are being closely watched for signals that the president would issue pardons to people in special counsel Robert Mueller’s investigation of Russian election influence. There could be charges that the release of Hillary Clinton’s emails by Russian hackers was an illegal in-kind donation to Trump’s campaign. There has also been a suggestion that the hush payment to Stormy Daniels was a campaign donation, according to the New York Times.

Will be giving a Full Pardon to Dinesh D’Souza today. He was treated very unfairly by our government!