Want a Pocket for Your iPad? Ex-Lawyer Has the Vest for You 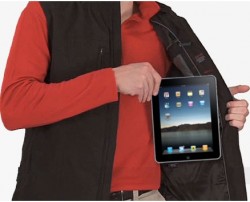 Scott Jordan proclaims on his website that his company sells the first and only clothing line with a pocket for the iPad. The website was also quick to note a Sunday article in the New York Times that reported on Jordan’s travel fashion savvy.

The Times told of Jordan’s 22-pocket Scottevest that holds an iPod, cell phone, glasses, wallet and other items. In the fall, Jordan plans to add a trench coat to his line that can hold a change of clothes and a laptop in its pockets. It also converts to a messenger bag that can be carried and stored on the plane.

Jordan came up with the idea for his travel vest when commuting between his Chicago home and a job in New Jersey, according to a 2003 article in American Way magazine.