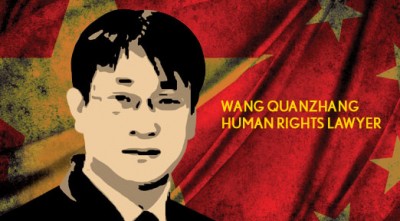 The wife of a detained Chinese human rights lawyer is planning a 12-day walk from Beijing to the city where she believes her husband may be imprisoned.

Li Wenzu says she doesn’t know whether her husband, Wang Quanzhang, is still alive, but she hopes her 100-kilometer walk will help get some answers, report the Guardian, the BBC, the South China Morning Post and Reuters.

Wang had defended political activists, Falun Gong defendants and victims of land seizures. He was detained in 2015 amid a crackdown on prominent human rights lawyers in China. He has been detained for 1,000 days, and Li says she hasn’t heard from her husband the entire time. Her husband’s lawyer has not been allowed to see him, though a government-appointed lawyer says he saw Wang last year.

“Maybe something horrible happened to him in jail and that is why authorities don’t want anyone to find out,” Li told the Guardian.

According to the Guardian, Wang is the last person detained in the 2015 crackdown who remains in legal limbo. Most of those arrested were released on bail, while some were convicted of crimes. Marching with Li is the wife of convicted rights lawyer Li Heping, who received a suspended sentence for subversion almost two years after he was detained.