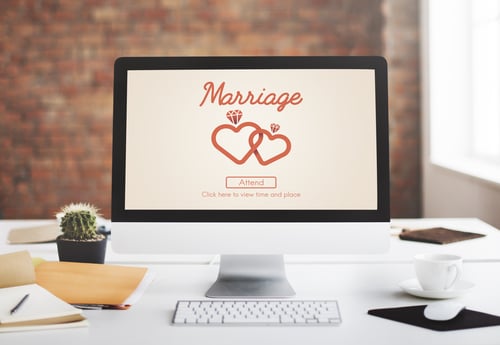 The U.S. Supreme Court next week will once again be a wedding venue—of sorts—when it takes up a major clash between a state anti-discrimination law and a business owner who refuses to create websites announcing same-sex nuptials.

Lorie Smith, a Colorado graphic designer, challenged her state’s public accommodations law and its protections against discrimination based on sexual orientation because she says her Christian faith means she cannot in good conscience create wedding websites for same-sex couples.

“I want to design and create for weddings, to create custom artwork telling stories,” Smith says in an interview. “And I want to do that in a way that is consistent with my convictions. But the state of Colorado is compelling and censoring my speech. Not only telling me what I can’t say, but telling me what I must say.”

As it comes to the Supreme Court, the case of 303 Creative v. Elenis is about whether the Colorado Anti-Discrimination Act violates the First Amendment free speech rights of Smith and her wholly owned design firm. The state argues that once a business decides to offer a product or service to the public, it must sell it to any customer regardless of race, religion, sexual orientation or any other protected characteristic.

“This is not a new principle,” Weiser adds, citing English and American common law traditions that proprietors such as innkeepers can not turn away some travelers after opening their rooms to others. 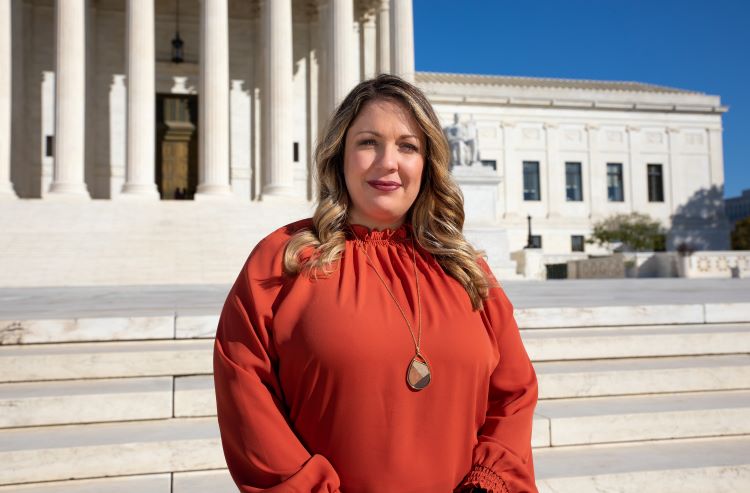 Lorie Smith, owner and founder of 303 Creative, at the U.S. Supreme Court in Washington, D.C. Photo from Alliance Defending Freedom.

David D. Cole, the national legal director of the American Civil Liberties Union, which has filed an amicus brief supporting Colorado, echoed some of the state’s arguments at a recent public forum on the case, noting that no one is required to open a business to serve the public.

“But if you choose to open a business to serve the public, it’s long been the rule, and it’s the rule in every state in the country, that you have to serve everybody equally,” Cole said at the Oct. 25 forum in Washington, D.C. “You can’t say ‘I’m serving the public, but I’m not going to serve gay people.’ You can’t say, ‘I’m going to provide a service to opposite-sex couples, but I won’t provide that same service to same-sex couples.”

The court ruled for the baker in that case on fairly narrow grounds: that the state civil rights panel had demonstrated religious hostility toward him. The court left open for another day the larger questions about granting exemptions from state anti-bias laws to those raising religious objections.

Sherif Girgis, an associate professor at University of Notre Dame Law School, said at the same forum that the new case “raises lots of difficult and interesting issues, especially in terms of where to draw the line” between anti-discrimination laws and First Amendment concerns of business owners.

“But in terms of the bottom-line conclusion, I think it’s a straightforward case” in favor of Smith and her firm, 303 Creative, Girgis said. “The idea that there is conduct here, namely the sale [of a website], and that’s separate from speech, is very hard to make sense of in this context because the sale is of speech that you created. And it’s the process of creating that speech implicates First Amendment values.”

‘As if she is selling widgets’

Smith, 38, says she had long wanted to open her own business, inspired in part by her parents, who were both entrepreneurs. She remembers spending time at her mother’s boutique.

“She was in the wedding arena, so I often heard brides coming in telling their stories,” Smith says. “How they met their soon-to-be husband. I just loved the storytelling behind it.”

With a business degree from the University of Colorado Denver, Smith worked in graphic design for private businesses and organizations before striking out on her own nearly 11 years ago with 303 Creative.

She stresses that she has welcomed LGBTQ customers who need her website design services for their own businesses. But her Christian beliefs lead her to believe that marriage is only between a man and a woman.

“While I work with everyone, I cannot create every message that is requested of me,” Smith says. “Colorado … tells me that If I create consistent with my deeply held beliefs, I have to set those aside and create custom unique artwork, one-of-a-kind expression, promoting a message of marriage that goes against my deeply held beliefs.”

Smith says she declines to design websites that demean people, promote atheism or gambling, or go against other of her principles. She has not yet been paid to design any wedding websites and she has prepared but so far refrained from publishing a web page on 303 Creative’s site explaining why she will decline to design for same-sex weddings for fear of enforcement by the state.

Based on how the state had applied its anti-discrimination law to Phillips and others in the wedding arena, Smith decided to sue state officials and seek an injunction based on her First Amendment speech and free exercise rights. A federal district court ruled for the state. The Denver-based 10th Circuit U.S. Court of Appeals held that Smith’s websites were pure speech and that the state civil rights law effectively compelled her to create speech, in the form of custom websites for same-sex weddings, that she otherwise would not create. The appeals court went on to hold that the the state met the constitutional test of strict scrutiny; the state has a compelling interest in guaranteeing LGBT consumers access to Smith’s services because they are, by definition, unique and unavailable elsewhere.

Kristen K. Waggoner, the CEO, president, and general counsel of Alliance Defending Freedom, the Christian legal organization representing Smith, says Colorado approaches the case by emphasizing the sale of products or services rather than Smith’s speech.

“They essentially approach it as if she is selling widgets,” says Waggoner, who argued the baker’s case five years ago and will argue Smith’s case. “It’s important to realize that Colorado has no limiting principle. It gives the government unchecked power to compel all kinds of speech from a variety of speakers, including the LGBT website designer who doesn’t want to promote a view of marriage that violates her convictions.”

Weiser, a Democrat, says the state accepts the idea that Smith may create custom websites.

“What we don’t accept is that she can create a service based on who someone is,” he says.

The state argues in a brief that Smith’s proposed exemption from anti-discrimination laws for speech that was inconsistent with the speaker’s own beliefs would be unworkable and itself would have no limiting principle.

Weiser says the state is “defending a core civil rights principle that dates back a long time in American law. If you create the sort of loophole being advanced in this case, it threatens to do a lot of damage.”